Home » MLB » The Yankees and Astros both went for it at the deadline. Which team is in better shape for October? 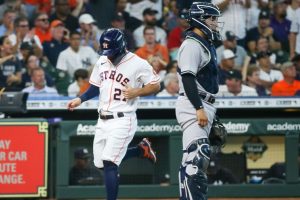 The New York Yankees and Houston Astros have been on a collision course since spring training. Yankees general manager Brian Cashman began a little war of words with Astros owner Jim Crane, blaming the Yankees’ lack of World Series appearances since 2009 on the Astros’ cheating scandal.

“The only thing that stopped [us] was something that was so illegal and horrific,” Cashman told The Athletic in March, referencing his 2017 club that lost to the Astros in seven games in the ALCS. “So I get offended when I start hearing we haven’t been to the World Series since ’09. Because I’m like, ‘Well, I think we actually did it the right way.’ … The only thing that derailed us was a cheating circumstance that threw us off.”

It was a strange thing to say. There have been many other years when the Yankees didn’t make it either, including in 2019 — when Jose Altuve hit his controversial, ALCS-winning walk-off home run off Aroldis Chapman to eliminate the Yankees.

And it seems like the Yankees and Astros could be headed for another ALCS showdown — their third in six years — as they have, yet again, dominated the American League this season.

That matchup isn’t inevitable; it is baseball, after all, and anything can happen in the playoffs. Plus, the Yankees are just 13-19 since July 3, snapping a season-high five-game losing streak on Monday. The slump has left fans wondering whether the team peaked in the first half of the season.

Still, with both clubs well ahead of the rest of the AL pack, it does feel like they spent the trade deadline making moves to counteract each other. Let’s take a look.