Home » MLB » The end of tanking? How to make every MLB team try to win every year

The end of tanking? How to make every MLB team try to win every year 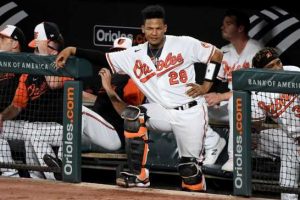 Editor’s note: From rising strikeout totals and unwritten-rules debates to connecting with a new generation of fans and a looming labor battle, baseball is at a crossroads. As MLB faces these challenges, we are embarking on a season-long look at The State of Baseball, examining the issues and storylines that will determine how the game looks in 2021 and far beyond.

The MLB trade deadline has come and gone. The excitement of a pennant race is nearing for baseball’s contenders, but fans of teams at the bottom of the standings are left with nothing to look forward to until next season.

As a full schedule of games begins Friday, half the teams playing are essentially out of contention. But what if an August game between the Cleveland Indians and Detroit Tigers had meaning? Same for the depleted Chicago Cubs against the Miami Marlins.

And could Major League Baseball create a system that leads to those 15 teams being closer to the playoff race in the first place?

Ask any major league player what his top priority is as the players’ union and MLB attempt to reach a new collective bargaining agreement before the current CBA expires on Dec. 1 and you’ll often hear a version of the same answer: Get all 30 teams to compete every season.

“You’re going to hear that a lot from us,” St. Louis Cardinals pitcher and MLBPA executive board member Andrew Miller said recently. “I think everyone is going to be sick of that phrase. As players, we’re required to compete every single time we’re between the lines. That’s expected of us. As a player, you hope that your team is doing the same.”

It’s why the word “rebuild” has a negative connotation across the sport. The teardown-style rebuild that has become commonplace across baseball inherently means low payrolls and a team with no hope of competing for a playoff spot for a few years. Under the current system, prospects graduating from Triple-A to the majors work for cheap but rarely do they win. That comes later — as do the heftier salaries. The players believe an adjustment is needed.

“Competition from all 30 teams will fix a lot of what’s going on in the markets,” Miller continued. “If everyone is trying to win the free-agent market, it will certainly be better for players. It solves a lot of issues at hand instead of just, ‘Let’s add dollars here; let’s add dollars there.'”

With that in mind, ESPN asked front-office executives, players, agents and other baseball insiders how they would get all 30 teams to simply try to win every season.

“Do a reverse-order draft,” White Sox play-by-play announcer Len Kasper said. “The best team that doesn’t make the postseason gets the No. 1 pick. … A big issue in the industry now is that September baseball can be very tedious. To have a series at the end of the year where a team can win two of three and get the first pick of the draft is intriguing.”

This was a popular response among those we asked that could keep teams competitive, and fans interested, for the entire season. Would the Cubs have just traded all of their star players if they had a shot at next summer’s No. 1 pick by playing better now?

August and September would still be about prospects for the non-playoff teams, but managers and front offices would have to weigh that with winning games to improve draft position.

One player liked the idea of using a tiered lottery system for the 20 non-playoff teams.

“Under that scenario, the five teams with the best record not playing in the postseason have a shot at the No. 1 pick,” he said. “The next five get picks 6-10 and so on.”

One former executive suggested a rolling five-year standard to determine draft order. For example, in 2022, the league would use the combined records of teams from 2017 to ’21 to determine the order — not just from this season like it does now. Worst five-year record gets the first pick. In 2023, they would use records from 2018 to ’22. This would decrease the incentive to bottom out for a year or two to get the No. 1 pick.

“Exploring changes in how the draft order should be determined makes a lot of sense,” Cubs player rep Ian Happ said. “We’re for anything which incentivizes winning.”

The draft format is among the CBA items that MLB and the union are currently discussing, but there is no indication that the draft will move away from the current format that awards the No. 1 overall pick to the team with the worst record the previous year.

Reimagining the draft also doesn’t solve another problem rooted in the number of teams that choose not to compete in a given season.

Offseason spending, specifically the lack of it, by teams in a rebuild is what players most want to see addressed in the next CBA. They would like a robust free-agent process in which more than a handful of organizations are in on both the biggest names on the market and veteran players looking for a team.

The most obvious way to increase payrolls, according to many in the game, is to have a salary floor. This would require teams have a minimum amount of player salaries every season. That yearly figure, according to one agent, could be calculated using average television revenue per team divided by the 30 clubs or some subset of that formula. Say it turned out to be $100 million this season. Eighteen of 30 teams had a payroll over $100 million on Opening Day this season. The other 12 would have to increase theirs to meet that requirement.

Of course, owners aren’t going to just accept a concept that forces them to dole out more money.

“A salary floor usually comes with a cap,” Miller said. “We can appreciate it. We like the core of the system we have. We think there are some tweaks that need to be made. But ultimately, when you talk about a salary cap or revenue sharing or whatever your words are, it doesn’t make things easier.

Several current executives said that perhaps it was time for a revenue-sharing system between the players and league. They saw how the pandemic exposed inherent flaws when the two sides aren’t in concert.

Both the NBA and NHL share revenues between the players and owners. When revenues go up, everyone benefits. And everyone is hurt when they go down, as happened in 2020.

“We already have a cap,” one player said. “It’s called the CBT [competitive balance tax].”

Yet another dirty word for players, many believe the CBT acts as a salary ceiling, artificially keeping even the big-market teams from exceeding it often. In 2019, only three teams had a payroll over that season’s $206 million threshold.

Teams have indicated that their budgets sometimes revolve around a desire to avoid the luxury tax, especially because baseball’s system increases penalties for exceeding it in consecutive years.

Just last month, the Cubs paid first baseman Anthony Rizzo’s entire $5.6 million salary for the rest of 2021 while trading him to the Yankees. New York can afford him but wanted to stay under the threshold. The same applied for Joey Gallo in a trade with the Texas Rangers.

“There’s no better example of the CBT impacting spending than that,” one agent said. “The Yankees were able to do the trade because they gave the Cubs and Rangers better prospects in return. Would they have signed Rizzo [if he was available in free agency] last winter if it put them over the threshold? There’s nobody to pick up the salary then. Probably not.”

Still, others in the game push back on the notion that the CBT is a de facto salary cap. Trades would be much more difficult with a hard cap. The current system at least allows for freedom of player movement, tax or no tax.

Another change to the current system could force teams to spend more every offseason without requiring them to dip into the free-agent market.

“Getting players paid earlier,” Miller said. “There’s plenty of ways to do that. Service-time manipulation will come up.”

Analytics have told executives, and subsequently owners, that players in their 30s are entering their decline phase, and paydays for veteran free agents have dried up as a result. According to ESPN Stats & Information, in the five-year span from 2011 to 2015, teams signed a total of 181 players who were 30 or older to multiyear deals. That number dropped to 154 from 2016 to 2020. Under the current system, that’s at an age when many players are hitting free agency for the first time.

“If front offices believe the game is going younger, then players should be paid at a younger age,” one AL player said. “What’s the point of making it to free agency if they believe you’re over the hill?”

Players would love to see free agency start sooner, which would also come with arbitration starting sooner or perhaps being eliminated. How would that push teams to spend more in the offseason?

“There’s a few ways,” one prominent agent said. “If free agency comes after four years, let’s say, you might be more aggressive in locking him up for that longer-term deal. Who wants to draft and develop a player that’s gone so quickly? If he’s a star, you might be inclined to win as much as you can while he’s at his peak.

“If you have a couple of those players that you may not re-sign, then you may be more inclined to field a winning team while you have them under your control.”

When players do hit free agency at a younger age, if their team doesn’t sign them to a long-term deal, they will also be more attractive to free-agent suitors because they are still in their prime.

“Paying players earlier will impact all of this,” one NL player said adamantly. “I’m convinced that’s an answer. But we’ll never know until we see it in action.”