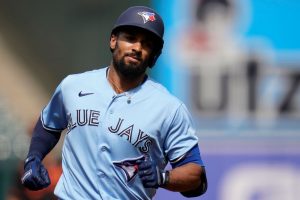 Infielder Marcus Semien and the Texas Rangers are in agreement on a seven-year contract, sources familiar with the deal told ESPN’s Jeff Passan on Sunday.

After struggling in the shortened 2020 with the A’s, Semien bet on himself last offseason, accepting a one-year offer from the Blue Jays in an attempt to rebuild his value and re-enter free agency. He bet right. Semien moved to second base with Toronto and responded with one of the best power seasons from a second baseman in major league history, hitting .265/.334/.538 with 45 home runs, breaking Brian Dozier’s record for home runs by a second baseman.

The move to second base went smoothly as well as Semien won a Gold Glove. He played every game for the second time in three seasons (and has missed just 10 games over the past four) and led the majors with 86 extra-base hits. While he played in the shadow of teammate Vladimir Guerrero Jr. throughout the season, Semien finished second in the AL in Baseball-Reference WAR behind Shohei Ohtani and third in FanGraphs WAR behind Ohtani and Guerrero, then finished third in the MVP, matching his result in 2019, and making him the only player with two top-three MVP finishes in the past three seasons.

In order to cash in on his big season, Semien brought on Scott Boras as his new agent. He’s entering his age-31 season after turning 31 in September and reportedly went into free agency seeking a $200 million contract. The last position player that age (or older) to receive that much in free agency was Robinson Cano, who signed a 10-year, $240 million contract with the Mariners prior to the 2014 season.

Semien’s approach at the plate was a little different in 2021 than during his 2019 breakout season, when he hit .285/.369/.522 with 33 home runs. He walked more that season, but became more aggressive in 2021, especially on fastballs as 36 of his 45 home runs came on fastballs. That approach did leave him more vulnerable to breaking balls, as he hit .193 against curveballs and sliders compared to .246 in 2019.

One evaluator told ESPN’s Buster Olney in October that “I know [Semien’s] power numbers jumped [in 2021], but I wouldn’t expect that’s going to continue. He’s not really a home run hitter.” Perhaps, but Semien’s approach did become more geared to power. He became more adept at pulling the ball in the air – he pulled 39 of his home runs, many of those right down the line — and increased his fly ball rate from 25.5% in 2019 to 36.7%.

Originally drafted by the White Sox out of the University of California, Semien returned to the Bay Area when the A’s acquired him in 2015. He famously struggled defensively early that season at shortstop, committing 24 errors by the end of June (he finished the season with 35 errors, the most in a season since 2000). Through work with A’s coach Ron Washington, however, Semien became an above-average shortstop, finishing with plus-17 Defensive Runs Saved combined over the 2016-19 seasons.

He was even better at second base, leaving Semien attractive to teams seeking a player at either up-the-middle position, although Semien had stated his preference was to return to shortstop. He also comes with an A+ reputation as a person and teammate, leading one insider to tell Olney, “I would put my head on the pillow every night knowing that the money I spent to sign him is going to be worth it.”