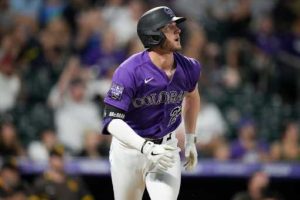 Home runs have been few and far between for the Rockies this season.

Ryan McMahon believes he can help change that. Soon.

“I’m trying to grind out some at-bats and help the team and do everything I can,” the third baseman said Friday prior to Colorado’s game against the Dodgers in Los Angeles. “I think if I get in the zone again, the home runs will come. As everybody always says, ‘That’s baseball, that’s just how the game goes.’ The home runs come in bunches and there is no real reason. It just kind of happens.”

McMahon entered Friday’s game with a team-high 16 home runs but had not launched a ball over the wall in 24 games, the second-longest drought of his career.

“It’s not something that I think about daily,” he said. “I’m obviously aware of it and I know I haven’t jogged around the bases in a while.”

As a team, Colorado lacks firepower. With 88 homers, it’s on pace to finish with 149, which would be the second-fewest in franchise history for a full season. The 1993 inaugural club hit 142.

Numbers suggest the McMahon is due for a home run binge. Over his last 15 games, he was hitting .321, with four doubles and four RBIs entering the weekend. His 42.4% hard-contact rate ranks sixth in the majors, trailing only Fernando Tatis Jr., Aaron Judge, Bryce Harper, Shohei Ohtani and Salvador Perez.

“Home runs come in spurts, but I think ‘RyMac’ has been swinging the bat great, as of late,” said bench coach Mike Redmond, who’s been managing the team while Bud Black has been out to do COVID-19 protocols. “Typically, when guys start swinging the bat well, their confidence grows and then the home runs come.

“We know ‘Mac’ can hit and when he gets hot, he gets hot. The home runs are going to come when they come.”

McMahon, however, doesn’t think he’s been in a great place at the plate. That’s something he wants to rectify.

“I’ll be really honest with you guys, I haven’t felt that great at the plate for the last month or so,” said McMahon, who had a .258 average and a .794 OPS entering Friday’s game. “I’ve been kind of grinding it out and working on stuff daily, to try to get to the best spot I can be in. But that’s baseball, man, it’s a tough sport.”

It’s a sign of his maturation that McMahon has been able to continue to field his position well and not fall into a deep slump at the plate.

“The younger me would have been worried about putting up numbers, and things like that,” he said. “I have a good viewpoint on how all of this works now. You go out and play for the team and everything else kind of takes care of itself.”

Back from COVID. Redmond said that Black is “close to returning” from his absence, and added that first base coach Ron Gideon was back, in uniform and would coach Friday night. They have been out since July 16.

Pitchers Yency Almonte, Jhoulys Chacin and Antonio Senzatela, as well as outfielder Yonathan Daza, were placed on the COVID injured list. Senzatela and Chacin are now at the Rockies’ facility in Scottsdale, Ariz., working their way back to the big-league club. Almonte and Daza will soon report to Arizona, Redmond said.