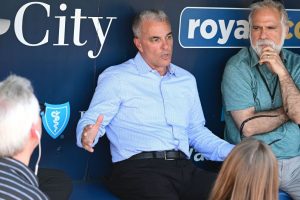 Moore, 55, had been the lead baseball executive for the Royals since replacing former general manager Allard Baird in 2006. After a rebuilding period, the Royals won back-to-back AL pennants in 2014 and 2015. The second of those years ended with the second World Series title in franchise history.

After that flurry of success, the Royals embarked upon another rebuild while stars from the championship team like Eric Hosmer, Lorenzo Cain, Mike Moustakas and others moved on to other teams. The Royals lost 103 and 104 games respectively in 2018 and 2019 while restocking the minor league system.

With several prospects reaching or approaching the majors over the last couple of seasons, including touted shortstop Bobby Witt Jr., the Royals were expected to take a step forward this season. Instead, Kansas City started 20-41 and have spent much of the season transitioning the roster to younger players, often fielding lineups with six or more rookies on a given night.

Sherman cited the need for a new organizational voice in making the decision to part ways with Moore.

“(Picollo) will bring a new lens and approach to leading our baseball operations,” Sherman said in a statement. “I look forward to working with J.J. as we continue to build and develop our team to compete at a high level.”

Picollo, 51, is his first season as the Royals’ general manager after serving in various roles under Moore since the latter took over in Kansas City. Picollo was promoted to general manager last September, replacing Moore, who was promoted to team president. He will carry the title Executive Vice President and General Manager, according to the team.

Moore joined the Royals after working in the Braves organization for more than a decade in scouting and development under Hall of Fame executive John Schuerholz.

“There’s a gap right now between where we are and where we expected to be,” Sherman said during the press conference.