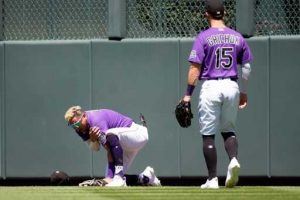 The club announced that Daza had suffered a left shoulder sprain and would be further evaluated.

Daza made an excellent running catch on a line drive by the Cardinals’ Nolan Arenado but tumbled to the ground after making the grab. Daza immediately clutched his left shoulder.

A team trainer helped Daza leave the field through the gate to the Rockies’ bullpen in right-center field. Daza was replaced by Garrett Hampson.

It was the second significant injury for Colorado in the last two days. Catcher Elias Diaz left Wednesday night’s game prior to the ninth inning because of an injury to his left hand. He underwent an MRI and was unavailable to play Thursday.

Triple-A catcher Dom Nuñez was scheduled to fly to Denver from Albuquerque on Thursday to serve as the backup catcher to Brian Serven. Nuñez had not arrived at Coors Field before the first pitch of Thursday’s game against the Cardinals.

This story will be updated