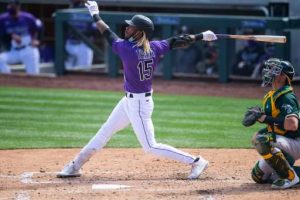 On the mound: Right-hander Ryan Castellani, hoping to impress and earn a spot at the back of the rotation, had a tough spring debut, giving up seven runs (four earned) on two hits. Two walks and two hit batters doomed him. He attributed that to “working too quick.” … The rest of the Rockies pitchers shut out the A’s for five innings.

At the plate: Left fielder Raimel Tapia hit a two-run, opposite-field homer to left in the third inning…. Outfielder Yonathan Daza went 2-for-2 with an RBI.

Worth noting: The Rockies suffered an ugly second inning. Tapia was charged with two errors on one play — first losing a ball in the sun and having it glance off his glove, then making a poor throw into the infield. Then first baseman C.J. Cron let a ball slide under his glove for another error, allowing a run to score.