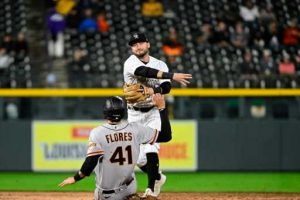 In the first inning of Wednesday’s damp, chilly game at Coors Field, Rockies first baseman C.J. Cron reached out to make a routine catch and complete an inning-ending double play.

But the baseball went right through the webbing of Cron’s glove.

It was that kind of night for the Rockies, who were thoroughly dominated by San Francisco right-hander Logan Webb in a 6-1 defeat.

Colorado avoided its 12th shutout of the season when rookie Elehuris Montero led off the ninth with a home run to left off of Thomas Szapucki. It was homer No. 6 for Montero.

Webb, who had to wait out a 1-hour, 5-minute rain delay, pitched a no-hitter for 5 1/3 innings before Colorado rookie left fielder Sean Bouchard punched a solid single into center field. At that point, manager Gabe Kapler pulled Webb, who struck out five and walked none.

The only other baserunner Webb allowed was Cron, who was hit in the left hand by a pitch in the fourth inning. Cron left the game prior to his at-bat in the sixth inning with a left-hand bruise. X-rays of the hand were negative.

While Webb confounded the Rockies, German Marquez’s confounding season continued. He was done after five innings, having given up four runs (three earned) on nine hits. He walked one and struck out six. With two starts left in his season, Marquez, an All-Star in 2022, has an 8-12 record and a 5.15 ERA.

Giants first baseman LaMonte Wade Jr. led off the game with a double to right and scored on the ball that burned a hole in Cron’s glove. As it turned out, that one run was all the Giants needed.

Giants roughed up Marquez in the fourth, scoring twice on a leadoff double by Brandon Crawford, a triple into right-center by Jason Vosler and a run-scoring single by Luis Gonzalez.

Colorado’s inability to turn a 6-4-3 double play in the fifth kept the Giants’ inning alive and led to another run, with Crawford driving in Wade with a single to right.

Left-hander Austin Gomber, who wants to be part of the starting rotation next season, pitched three scoreless innings until the Giants hit three singles and drove him out of the game in the Giants’ two-run ninth.