Rizzo ending talks with Cubs to focus on season 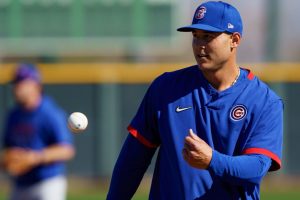 CHICAGO – Longtime Chicago Cubs first baseman Anthony Rizzo will begin the season without a contract with the team beyond 2021, and is instructing his agents to end negotiations so he can concentrate on baseball.

“It doesn’t look like anything at this time anything is going to be finalized,” Rizzo said on a Monday morning zoom from spring training. “With (the) opening day deadline, we feel really strong about it. We’ve had enough time to talk and figure it out. I’ve told my agents not to talk to me about it anymore.”

Rizzo is entering the second of two option years the team exercised on him after completing a 7-year, $41 million deal with the club in 2019. Earlier in spring training he expressed optimism about signing another long term deal with the club but, once talks began, the sides realized they weren’t close on a deal.

“When you think of the actual business side of it, you can’t just be naïve to think that just because of what I’ve done here, and what I’ve expressed, they’re just going to hand me a contract,” Rizzo said. “Have to go out and earn it. I look forward to just continuing to play.”

It’s believed the sides are far apart, according to sources familiar with the situation. Rizzo is seeking a multi-year deal which the market would indicate is around $100 million. The Cubs have come in well below that figure.

“It’s good to have clarity one way or another,” Rizzo said. “Now I can get ready for the season.”

Rizzo is a 3-time all-star and 4-time gold glove winner, helping the Cubs to a World Series title in 2016. He and teammates Javier Baez and Kris Bryant will all be free agents at the end of the 2021 season. Neither of those two other players is expected to sign back with the team before opening day as well.

Despite a Thursday deadline for negotiations, Rizzo is open to hearing from the Cubs during the year if they come to him with something new – and to his liking.

“If someone comes with a nice blank check and says, ‘what do you want?'” he said. “From my mentality and standpoint I’m firm on playing baseball and not worrying about any dollar figure.”