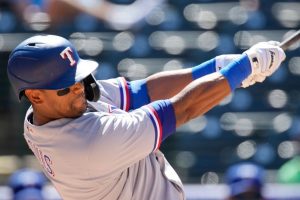 The Texas Rangers designated outfielder/designated hitter Khris Davis for assignment on Tuesday after he was hitting .157 in his first season with the club.

Davis, who was acquired in the trade that sent longtime Rangers shortstop Elvis Andrus to the Oakland Athletics, has two home runs and five RBIs in 22 games with Texas. He began the season on the injured list with a strained left quad.

The 33-year-old Davis led the American League in home runs in 2018 for the A’s when he hit 48 and went on to win the Edgar Martinez Award as the major leagues’ top designated hitter.

The Rangers now have seven days to trade or release Davis, who also could be sent to the minors if he were to accept such a move.

The Rangers recalled infielder/outfielder Eli White from Triple-A Round Rock in a corresponding move.