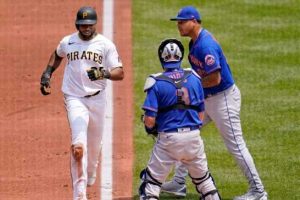 PITTSBURGH — Now this was Bucco Bizarro at its best.

With the bases loaded and one out in the first inning, Kevin Newman hit a dribbler down the third-base line. The ball started out in foul territory but then began spinning back toward the line.

Walker swooped in and swatted at the ball, trying to make contact while it was still in foul ground. But TV replays showed the ball was touching the chalk when Walker hit it, and plate umpire Jeremy Riggs correctly called it a fair ball.

The ball rolled toward the Pirates’ dugout and the Mets did not react to retrieve it, and all three Pittsburgh runners took off and came around to score.

Rojas immediately ran out to argue the call and was quickly ejected. Walker was charged with an error on the play, while Newman was credited with a single and one RBI.

Walker, in his first outing since pitching in the All-Star Game on Tuesday night, then walked pitcher JT Brubaker and was pulled from the game. He allowed six runs on four hits and four walks while recording just one out.