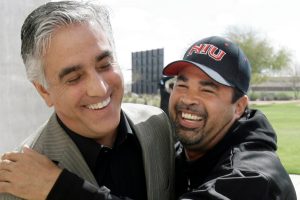 For many people in baseball, spring training is just not the same this year because a familiar face is missing.

Reporter Pedro Gomez, who covered the game for ESPN for the past 18 years, unexpectedly died last month. During the network's broadcast of Tuesday afternoon's Tampa Bay Rays-Boston Red Sox game, the announcers paid tribute to their former colleague by interviewing Gomez's son, Rio, a minor league pitcher for the Red Sox.

"The connection and the love that we had that tied us together with baseball was second to none," said Gomez, 26. "He was my biggest fan, my biggest supporter. There was times I didn't even believe in myself during my career and he was there to push me with that belief."

The left-hander isn't with Red Sox in Fort Myers, Florida, but is preparing for the opening of minor league camp, which he called "the light at the end of the tunnel" after the cancellation of the 2020 minor league season.

The younger Gomez, who helped lead the University of Arizona to the 2016 College World Series, last played in 2019 at Advanced Class A Salem (Va.), and had a 2.20 ERA in 69 ⅔ total innings at low- and high-A.

He said he talked often with his father about the highs and lows all minor leaguers face. And occasionally when he was struggling, Pedro would unexpectedly show up at a game and give his spirits a boost.

"There was many times he was more excited about my own career than I was. It was always great having him by my side like that," Gomez said.

In the wake of his father's death, Gomez said his family were stunned by the wide range of people from all across the game who expressed their sympathies – not just from media members, but athletes, coaches, umpires and fans as well.