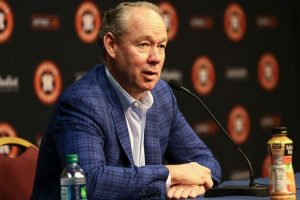 In the six days between the Houston Astros winning a World Series and getting rid of their general manager, members of the organization, from players to coaching staff to front office, called one another trying to piece together what was happening.

Over the last year, the disarray in the Astros’ front office had exposed itself often enough that employees at all levels wondered how, exactly, an organization so adept on the field could be so chaotic among those tasked with building that on-field unit. They knew about the palace intrigue, had watched the behind-the-scenes machinations that had persisted throughout the season. They had one Hall-of-Fame advisor with a reputation for yelling at people, another frequently questioning the organization’s direction. All the while, a general manager was under siege, and the owner who had vowed to take a more hands-on approach because of that crisis watched it all play out.

But suddenly, last week, the information spigot turned off. Rumors swirled about the future of the organization, and no one could get an answer. By Friday, after the news of James Click’s eyebrow-raising ouster, one thing was clear: The only person with clarity over what was happening with the Astros — owner Jim Crane — was disinclined to tip his hand.

Now, those inside the Astros are asking questions that World Series-winning teams rarely must ask. Is the team that reached six American League Championship Series, four World Series and won a pair of championships in the last half-dozen seasons really considering pivoting from the analytics-heavy approach that built the team into a monster? Without Click, who will shepherd the team forward? And is the answer to that question perhaps the person already at the center of the front-office dysfunction?

“Sometimes I wonder if Jim thinks he’s Jerry Jones,” said one Astros employee, who was among the dozen people with knowledge of the organization with whom ESPN spoke to better understand the inner workings of arguably the most successful franchise in baseball. Not since Larry MacPhail in 1947 has a championship franchise parted ways with its top baseball executive so soon after a title, but what became clear over those conversations was Crane’s willingness to meddle in baseball-operations decisions, much like the Dallas Cowboys owner who also serves as GM. It’s a path certainly in Crane’s purview as owner but rare among his peers in baseball — and it suggests that Click’s work always came with impediments.