Home » MLB » Opinion: It’s easy to see why the Mets will be all smiles with Francisco Lindor

Opinion: It’s easy to see why the Mets will be all smiles with Francisco Lindor 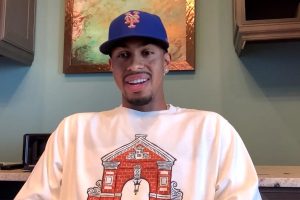 Francisco Lindor was on full display for all of New York to see Monday.

After watching his charm, charisma, humility, eloquence and intelligence, no one would have blamed Mets owner Steve Cohen from bursting into the room to offer a $350 million contract on the spot.

Lindor may have been simply on an introductory Zoom call while sitting at home as the newest member of the Mets, but, man, can he command a room.

He let the Mets know he’s interested in talking about a long-term contract extension before the season. But if they can’t reach an agreement, it’s no big deal.

He told his new teammates that he’s ecstatic to join them, but he’s not here to lead them to the World Series, only to be a part of a talented group to get them there.

WHERE TATIS' CONTRACT TALKS STAND: How big will contract be?

While it’s become common for players to burn bridges on the way out of town, particularly ownership who made the decision to trade him strictly for financial reasons, Lindor should be president of Cleveland’s chamber of commerce after his parting remarks. He let everyone know just how much he loved his time in Cleveland, effusively thanking the fans for their hospitality, along with teammates and the organization.

Lindor was absolutely captivating during his 40-minute introductory press conference, greeting most reporters by name, sitting back relaxed as he answered questions.

“To all of those fans out there," Lindor said, “I live life day by day. I’m extremely happy and excited about what’s happening right now."

Oh, and about negotiating a contract extension that could ensure he stays in New York for the rest of his career?

“It just has to make sense for both sides. If the numbers are right, and what we think is appropriate, hopefully we can get a long-term deal done. We’ll see what happens."

Let everyone deal with the stress of a potential new deal because Lindor sure won’t. The shortstop has a self-imposed deadline of spring training to finalize a contract that would prevent him from testing free agency after the season.

“I have never negotiated a contract during a season," he said. “Never. I’ve always said before spring training, but once it gets to a point in spring training, it’s time to enjoy the ride and focus on winning. That’s the only thing I should be focusing on, not how much money I’m going to get."

Lindor could become one of the biggest stars in franchise history with hopes of leading the Mets to their first World Series title since 1986.

“They say there is a lot of pressure in New York," he said. “It’s a big market, there are a lot of people on top of you. But I’m blessed to play the game.

And, yes, if you want to find a guy with a perpetual smile and love for the game, almost incredulous that he’s paid for something he loves, you don’t have to look any further than this guy.

Really, Lindor is made for New York.

He will not cower from the spotlight.

He will not shy away from expectations.

He will embrace greatness.

“I just want to add a little bit to the puzzle they have," Lindor said. “I’m not here to put the puzzle together."

Well, don’t let Lindor’s humbleness fool you. He may not scream and shout. He’s not going to call out anyone in the tabloids. He’ll do it quietly, making sure they understand their responsibility.

Lindor did it with pitcher Trevor Bauer when Bauer threw a baseball over the center-field wall in Kansas City two years ago out of frustration.

“He just blew me up, which I deserved,’’ Bauer said on his YouTube channel. “He yelled at me, he told me it was unacceptable, and all of these different things. I thought it was a really good moment. … He understood that his role on the team was to lead.’’

And he did with teammates Mike Clevinger and Zach Plesac when they violated team protocols last summer and went out in Chicago.

“Two great guys, fun to be around, caring people,’’ Lindor said, ”But they made a bad decision. Live and learn. It’s not about us. It’s about caring, neighbors.

“The only way we’ve going to stop (COVID-19) is by caring about others and not just ourselves."

When asked about the potential budding rivalry in New York with the Yankees, Lindor simply smiled.

“It’s not necessarily what happened in the past,’’ Lindor said. “It’s about today and the present. …Obviously everyone wants to be the No. 1 team in New York, but we want to be the best team in the entire country.’’

And, if that happens, Lindor said maybe he can watch the game films from the 2016 World Series, when the Chicago Cubs recovered from a 3-1 deficit to win the World Series in seven games over Cleveland.

But until then, well, he’s got to take care of business.

First thing on the agenda?