Home » MLB » Opinion: First-place New York Mets about to find out what they’re really made of

Opinion: First-place New York Mets about to find out what they’re really made of 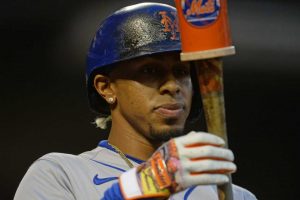 PHOENIX — Their $341 million shortstop, until this week, has been a colossal bust.

Veteran starter Carlos Carrasco, who came along with shortstop Francisco Lindor in the mega-trade with Cleveland, still hasn’t thrown a single pitch.

Electrifying starter Noah Syndergaard has been shut down again with no idea when, or if, he’ll pitch again this season.

Their new general manager lost his job a month before spring training, and the hitting coach was fired 23 games into the season.

They have 13 current players on the injured list, down from a season-high 17 that included six players from their opening-day lineup.

Then again, they happen to be in the worst division in baseball, and they are the lone team in the NL East with a winning record.

“We certainly aren’t performing like the best division in baseball and living up to offseason predictions,’’ Mets president Sandy Alderson told USA TODAY Sports. “I think injuries have had something to do with that. Right now, we’re happy to be in the NL East.’’

Alderson, coaxed back to New York by new owner Steve Cohen, is thoroughly enjoying the journey of bringing the Mets back to prominence. Oh sure, not everything has gone well. You don’t plan on hiring a GM and firing him five weeks later because of lewd text messages sent to a female reporter. You don’t offer $105 million to free agent starter Trevor Bauer and expect to be spurned. You don’t enter a season anticipating that you’ll be firing coaches in early May.

But here they are, sitting tall in a flawed division that appears more winnable by the day.

Lindor signed a 10-year, $341 million extension before ever playing a game for the Mets. (Photo: Joe Camporeale, USA TODAY Sports)

"It’s been fun," Alderson said. “I’ve really enjoyed the relationship with Steve and the buildout of the front office, which is doing really well. We had some hiccups with Jared Porter, but [acting GM] Zack Scott has done an excellent job as we continue to build out the analytics side of the front office. Both the scouting information and analytic info has been pretty well received by the uniformed staff.’’

The analytics certainly have played a key role in the Mets’ defensive improvement, Alderson and manager Luis Rojas say, and the catching tandem of James McCann and Tomas Nido is drawing rave reviews from the pitching staff.

And just last week, when the Mets’ injuries were piling up, it was Cohen who tweeted: “Anybody want to suit up?’’

Yet despite the rash of injuries, with 43 players already suiting up, they are threatening to pull away from the pack.

“We did face adversity," Rojas said, “but every single player on this roster came ready to play. We have different heroes."

Can you imagine what this team will look like once Lindor starts to become one of those heroes?

Lindor was atrocious the first two months of the season, entering Memorial Day weekend with a slash line of .185/.290/.268. It was the longest stretch of his career hitting below .200 with a sub-.300 slugging percentage, and he was being booed at home.

The Mets insist they’re not weeping in the front office, either, despite a deal that will pay Lindor $32 million a year beginning in 2022 through 2031.

If Lindor was struggling like this with no contract extension, and still eligible for free agency after the season, Alderson believes Cohen and the front office would have been scorned as much as Lindor.

“That’s not justification for a guy hitting .198, but that’s how things would have fallen out.’’

The Mets don’t believe that Lindor’s start is anything more than adjusting to a new league, a new environment, and self-inflicted pressure trying to live up to the biggest contract for a shortstop in history. Scouts who have watched Lindor believe he’ll be just fine, and recently, he’s starting to resemble the guy the Mets envisioned all along. He’s on a 9-for-22 run (.409) with a double, triple, homer and three RBI, raising his season batting average to .209 – an increase of 27 points in six days.

“He’s starting to come out of it now," Alderson said. “Some people thought changing hitting coaches was precipitous on our part. We just thought we needed to improve the process, preparation, mechanical adjustment approach, having coaches that approach each of those things.

“We see the improvement."

Lindor, who was striking out at his usual 16% rate and wasn’t chasing balls out of the strike zone with any more frequency than in recent years, feels the difference himself. He’s using the whole field now, and barreling balls much more to his standard.

“I feel confident I can hit any pitch right now,’’ Lindor said. “I’m hitting the pitches I’m supposed to hit hard now. I’m back to being an offensive player and helping the team. …

The Mets still have their flaws, and considering their soft schedule – playing just 12 games against teams with a winning record, and going 2-10 in those – it’s difficult to gauge how good they really are two months into the season.

What can’t be debated is the frontline starters of the rotation: Who wants to face the Mets in a playoff series with Jacob deGrom (4-2, 0.71 ERA), Marcus Stroman (4-4, 2.66 ERA) and Taijuan Walker (4-1, 1.84 ERA). Walker has been the biggest surprise, signing only after Bauer chose to go to the Dodgers, picked ahead of free agents like Corey Kluber, Drew Smyly, Rich Hill and Anthony DeSclafani.

And, of course, there’s deGrom, who is pitching his way to Cooperstown. He hasn’t given up more than one earned run in any of his eight starts this year, striking out 82 while giving up just 22 hits. In his last start against the Arizona Diamondbacks, he threw 27 pitches of at least 100 mph. The hottest debate among scouts after his last outing is whether he’s the most dominant pitcher they’ve seen since Roger Clemens in 1986 or Dwight Gooden in 1985.

“I was watching baseball in ‘68 when Bob Gibson was pitching," said Alderson, 73. “I’ve seen some pretty good performers like Dave Stewart and Bob Welch in Oakland, and in San Diego with Jake Peavy, but nothing like this. In my experience, nobody’s come that close with this kind of dominance.’’

DeGrom’s 0.71 ERA is the lowest by a qualified pitcher entering the month of June since the Philadelphia Phillies’ Chris Short (0.64) in 1964. He’s the first pitcher since ERA became an official stat in 1913 to have a sub 1.00 ERA and a batting average of .450 over the span of any eight starts in history.

“I told him that it must be a wonderful feeling — knowing you’re the best in the world what you do," Alderson said.

The Mets, beginning with a four-game series Thursday against the San Diego Padres, are about to find out where they stand against the best, too. They play 11 of their next 13 games against the Padres and the first-place Chicago Cubs.

The Mets, with 10 games already postponed due to everything from COVID-19 to snow to rain, have a grueling stretch in which they will play 33 games in 31 days beginning June 11 until the All-Star break. They have only one scheduled off-day during the stretch and three doubleheaders in a seven-game span.

If the Mets reach the All-Star break still in first place, surviving the schedule and overcoming all of their adversity, who knows how entertaining Cohen might be on his Twitter account?

“Some people grow tired of dealing with Twitter, but I don’t think he’ll ever go conservative. He’s having fun with it.

“Of course, when you’re winning, everything is a lot more fun.’’