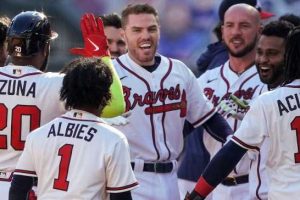 IT’S BEEN 21 years since you passed away, Mrs. Freeman, but my mother once told me that moms always love to hear how beautiful their babies are. So I want to tell you about the youngest of your three sons — Freddie. Wow, he is doing great. He is thriving, in a way that would make you smile the Rosemary Freeman smile that became his smile.

Freddie’s a pretty good baseball player, but you already had an inkling of that when he was little. When he launched his first home run in T-ball, you turned to Freddie’s dad — your husband, Fred — and exclaimed, “We have a home run hitter!” You were right, although Freddie and his reflexive self-deprecation are fully grown now and he’d never refer to himself as a slugger. Freddie batted .341 in Major League Baseball’s 60-game season last year, with 13 homers, and won the National League Most Valuable Player award.

But his job is ancillary to who he’s become. You’ll want to know how others cherish him — his co-workers, fans, colleagues on other teams. When the Phillies’ Bryce Harper reaches first base against the Braves, he says, his conversations with Freddie are often about topics other than baseball. “How we are doing, how our families are doing,” said Harper. “Freddie is just a great human.”

He’s known in baseball as Freddy The Hugger, Mrs. Freeman, which, of course, is all about you, and defines his eternal love for you. Family and teammates say that embrace you felt is deep, with layers. “He’s got an infectious personality,” said Hall of Famer Chipper Jones. “You know, everybody wants to hang around him. Everybody wants to get 30 seconds of his time and he doesn’t disappoint. He doesn’t turn anybody down.”

Most of all, though, you’ll want to know most about the family he has built — and no coincidence, it mirrors your family, Mrs. Freeman. He says his wife, Chelsea, loves him in a way that he says reminds him of your love for him, and you would be amazed and proud about the lengths she went to fulfill his dreams. Amazed. You would be amazed at how your presence resonates in all of them daily, never more than in the past year. His life story is “crazy,” Freddie said this spring, and he is so right.

Freddie talked to ESPN about all of this over the past six months. His first interview, the day before last Thanksgiving, was loosely scheduled for 90 minutes. But you should know that when the cameras rolled and the questions began, he was so dedicated to honoring you that he pushed himself through the most painful of the memories, clutching tissues in his right hand, relating experiences which, as he said, no 10-year-old should have to go through. Sobs often supplanted his words, but he wanted to talk about you to honor his mom and dad. He wanted to talk about the best days with you, and the worst, about saying goodbye to you, about how he grieved after you passed, about nearly being parentless by age 12, about how the life you started has now come full circle.

In that first afternoon spent wading through those evocations, he would collect his emotions enough to speak and continue, until the agony of loss overcame him. Then he would do it all over again. Hearing Freddie was wrenching. Hearing Freddie was inspiring, to witness your son’s love for you, for Fred, for his family, for your family.

Four hours later — four hours — he finished talking about how your Freeman 5 led him through the incredible journey to form his own Freeman 5, and he wearily made eye contact with me. Through a tear-soaked smile, he said, “Look at this.” He held up the tissue box, emptied completely.

Mrs. Freeman, you raised a strong boy. You would be so proud of your baby boy.