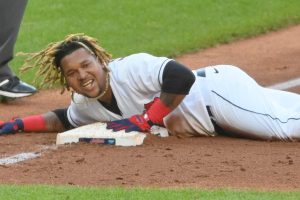 Base-stealing might be out of fashion in today's game, with the prevalence of the home run dwarfing the need to risk making an out on the basepaths.

However, smart baserunning never goes out of style. Cleveland's Jose Ramirez combined timely hitting with some nifty moves in the bottom of the third inning Wednesday night against the Baltimore Orioles.

With one out and runners on second and third, Ramirez delivered a two-run single to put his team ahead 4-3. As the go-ahead run crossed the plate, Ramirez found himself caught in a rundown between first and second. That's when the veteran's instincts took over.

He avoided the tag by doubling back and outrunning shortstop Freddy Galvis to the bag at second, then sprinted to third when he saw no one was covering the base.

Ramirez later scored as part of a five-run inning as Cleveland pulled out an 8-7 victory.

Afternoon games can provide their own special challenges, especially on fly balls that have a tendency to disappear due to a very large object in the sky.

Los Angeles Angels shortstop Jose Iglesias had an epic battle with the "Sun Monster" (h/t Bryce Harper) in his team's game in Oakland. In the bottom of the second inning, Iglesias not only had to find the ball, but had to run a long way in a heavily shifted defensive alignment to make one of the most spectacular catches you'll ever see.

Then one inning later, he made another crazy catch — ranging all the way into foul territory to flag down a ball off the bat of the A's Tony Kemp.

And he did it all without the benefit of sunglasses.

In Houston, the Astros' Jose Altuve became the first player in major league history to hit a walkoff grand slam in one game and then a leadoff home run in his team's next game.

While that's an interesting stat, something more interesting took place in the top of the third inning when Texas Rangers outfielder Eli White connected for his first major league home run.

But the moment became an even more special one when the fan who ended up with the home run ball tossed it back onto the field. Whether it was intentional, it allowed the Rangers to secure the ball and return it to White.

The crowd gave the thoughtful fan a nice ovation.