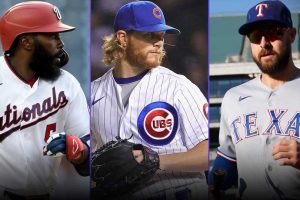 The 2021 MLB trade deadline arrives at 4 pm ET on Friday, July 30. We’ve already seen a handful of deals happen, deals that will shape how the playoff picture changes over the next few months.

The Rays traded for Nelson Cruz and traded away Rich Hill. The Padres traded for Pirates second baseman Adam Frazier. The Braves dealt for Joc Pederson. On Tuesday afternoon, the Pirates and Phillies sent Tyler Anderson from one end of Pennsylvania to the other.

Instead of just ranking every player who could potentially be dealt over the next few days, let’s look at a few specific categories and figure out which players best fit those categories. Think of them as pre-trade deadline superlatives.

Best impact bat: Kris Bryant, Cubs. You’re not surprised, I know. We’ve written about Bryant often in the past few weeks, once the Cubs cratered and it became obvious that the club would become a seller leading up to the deadline. And, yes, Bryant had a stretch of several weeks when he wasn’t producing like an impact bat, but his OPS for July is up to .900 and that’s pretty solid. He can play five of the eight defensive positions full time (at least through the end of the season), and he obviously can DH, too. Every contender has an obvious spot for Bryant in their lineup.

Best realistic infield bat: Trevor Story, Rockies. Well, the non-Kris Bryant option. It’s possible that Story won’t be moved, despite that he’s a free agent after the season and has no intention of staying with the Rockies. The club would have to receive more in prospect return than it sees as the value of the draft pick they’d get if (when) Story declines a qualifying offer. He hasn’t been quite the same hitter this year; he had a 123 OPS+ from 2018 to 2020, but that’s down to 89 this year and his on-base percentage is down from .355 in that span to .312 in 2021. He has a massive upside if he returns to form with a new club, but will any team meet Colorado’s demands?

Best blockbuster infield bat: Trea Turner, Nationals. All the headlines surrounding the Nationals were about Max Scherzer’s availability, but if the club moves Turner, that could have a longer impact on the acquiring team. He’s under club control through 2022, in his Age 28 season and is having the best year of his career: .320 average, 4.0 bWAR, 18 homers, 21 stolen bases, 146 OPS+ while batting leadoff and playing stellar shortstop. He’d be worth the massive offer it would take to land him.

Best realistic outfield bat: Starling Marte, Marlins. Again, the non-Bryant option, though a trade for Marte could make nearly a Bryant-level impact. You might not have noticed because he’s playing for Miami (and before that, Pittsburgh), but Marte is one hell of a player having one hell of a season for the Marlins: .303 average, .408 on-base percentage, 135 OPS+, 21 stolen bases, seven homers, 2.8 bWAR in 62 games. Like Bryant, he’s a free agent after the season. He’s a two-time Gold Glove winner (playing mostly left field in 2015-16), and he’s been primarily a center fielder since 2018.

Best blockbuster outfield bat: Joey Gallo, Rangers. Gallo won’t come cheap, largely because he’s not eligible for free agency until after the 2022 season. But he has the type of power that teams crave; Gallo has two 40-homer seasons under his belt, and he has 24 homers this season to go with a 4.0 bWAR, .380 on-base percentage and 137 OPS+ in 94 games. The team that swings a deal for him will need a deep farm system.

Best under-the-radar position player: Josh Harrison, Nationals. He’s 34 and not at the top of any trade lists, but teams could do far worse than a versatile veteran with a .282 average, 2.0 bWAR and 115 OPS+. Harrison can play third or second and either corner outfield spot. He could probably fill in at shortstop or center in a pinch, too.

Best starting pitcher: Max Scherzer, Nationals. Know how many front-office folks were thrilled to see the Nationals’ recent mini-collapse that left the club nearly 10 games under .500? Everyone who works for a contender. I wrote all about him and his potential destinations here.

Best middle-of-the-rotation option: Jon Gray, Rockies. I originally had Tyler Anderson penciled into this spot, but he’s off the board now, traded from the Pirates to the Phillies. Gray isn’t necessarily a guy who would start Game 1 of a playoff series, but he could help a team reach the postseason. He’s a free agent after the season and spent a bit of time on the IL, but he’s been outstanding since he returned: 2.57 ERA and 41 strikeouts in 35 innings covering six starts. He’s gone five full innings in each start, with a pitch count topping 97 only once.

Best back-of-the-rotation option: Merrill Kelly, Diamondbacks. Kelly is a unique story. He didn’t make his MLB debut until he was 30 years old; after struggling in the minors, he found his stride as a reliable starter in Korea. The Diamondbacks signed him before the 2019 season to a three-year deal with an option for 2023 ($5.25 million). He’s had a few rocky stretches in 2021, but he’s an efficient pitcher who is tied for the NL lead with 21 starts made and has a 2.62 ERA over his past seven outings.

Best roll-the-dice rotation option: Danny Duffy, Royals. He’s been really good when healthy this season — 2.51 ERA with 65 strikeouts in 61 innings — but he’s on the IL with a flexor strain, and not expected back until September. What’s the prospect trade cost for a guy like that? Hard to tell. But if he comes back healthy, he’s a September starting option for a team with big October dreams.

Best reliever: Craig Kimbrel, Cubs. We’ve written about him, too! Shocking. This was a couple of weeks ago, so the numbers have changed but the basic truths are still true: Kimbrel is putting up numbers that rival the best in his career, which is really saying something. There’s a club option for 2022, too; it’s not cheap ($16 million), but if he’s pitching like this and the team has World Series aspirations, he’s worth it.

Best setup-guy option: Ian Kennedy, Rangers. The Rangers gave the veteran an opportunity after his awful 2020 season, and he’s been everything they could have hoped for. He’s 15-for-16 in save opportunities, with a 2.59 ERA and right about a strikeout per inning. It’s doubtful that he’d be asked to close games for whatever team trades for him (barring injury to a closer, of course), but who doesn’t want a veteran arm with closing experience in their bullpen come October?