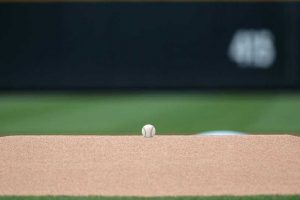 Rays minor league pitcher Tyler Zombro was hospitalized Thursday night after a line drive struck him in the head.

The frightening injury occurred in the eighth inning of a Triple-A International League game between Durham and Norfolk in Durham, N.C. Zombro, who was pitching for Durham, was hit by a line off the bat of Norfolk’s Brett Cumberland. He fell to the ground and then began convulsing as teammates and medical personnel rushed to his aid.

Zombro was taken from the field on a stretcher and transported by ambulance to Duke University Hospital in Durham. The Rays announced that he was in stable condition.

Players on the field were shaken by what happened.

The game was suspended immediately after Zombro was injured.

Sporting News is not embedding or linking to video of the play because of its graphic nature.

Zombro, 26, was making his ninth appearance of the season for Durham, all in relief. The Rays signed him as an undrafted free agent out of George Mason in 2017.