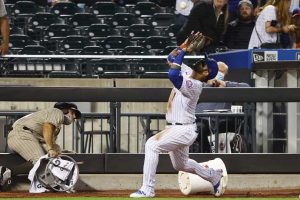 Villar was chasing down a foul popup hit by the Padres’ Jurickson Profar in the fifth inning. As he got near the San Diego dugout, four or five balls rolled in his direction. Villar even kicked one of the balls but stayed on his feet and made the catch.

Were the Padres blatantly cheating? No. The bat boy assigned to the San Diego side knocked over a bucket of balls at the absolutely worst time.

Clearly, the young man was trying to avoid contact with Villar and catcher James McCann but created more problems instead.

In the end, it was no harm, no foul, but there was a good chance of Villar turning an ankle or knee on that play. He missed two games last week with hamstring tightness, so he’s not playing at full health, either.

At least he wasn’t the object of unsportsmanlike conduct.