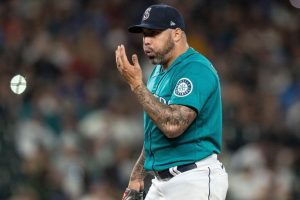 The Seattle Mariners pitcher was suspended for 80 games Thursday by Major League Baseball following a positive test for external testosterone, exactly one month after he was banned for 10 games when he became the first player penalized under the sport’s crackdown on grip-enhancing substances.

While the sticky substance penalty was with pay, the suspension under MLB’s drug program will cost him about half his $700,000 major league salary.