COOPERSTOWN, N.Y. — There were tears, there was laughter, and a whole lot of gratitude throughout the Baseball Hall of Fame three-hour induction ceremony, but the main attraction Sunday was Mariano Rivera.

Rivera, the five-time World Series champion, all-time saves leader and the only player to be a unanimous selection into the Hall of Fame, was the man much of the crowd of 55,000 came to see.

“I wasn’t going to miss this,’’ Duran told USA TODAY Sports. “He meant so much to me. I saw him as a young boy growing up in Panama, and look at him now, a Hall of Famer.’’ 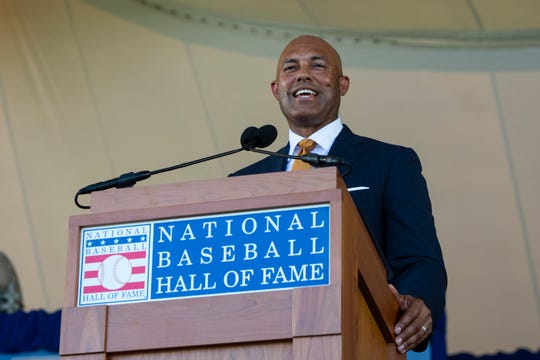 Posada and Jeter said they didn’t hesitate when Rivera invited them to Cooperstown, with the two taking a private plane from Miami.

“It was important to be here,’’ said Posada, who won five World Series championships with Rivera as the closer. “It was such a special time. When you look back, what we were able to do, wasn’t easy. We made it look easy, but it wasn’t.

“It’s hard. October takes a big toll on the pitchers. And we were able to bounce back.’’

The constant, of course, was Rivera, who saved 652 games, including 42 in the postseason, and a stunning 0.70 ERA, who will be remembered as one of the five greatest Yankees in history.

“I wanted to be the next Pele’,’’ Rivera said of the famous Brazilian soccer star. It wasn’t about Babe Ruth, Lou Gehrig. It was Pele.

“But my abilities were not good enough to be a soccer player. So the Lord was pushing me to baseball.’’

Rivera signed for just $2,000, received a new pair of shoes, and a glove, and remembers crying night after night, unable to speak English to communicate with his teammates. He learned English, learned to throw a cut-fastball, was sent down on the same day with Jeter in 1995, was called up in 1996 to stay, became the closer in 1997, and the rest is history.

“Then, that cutter came around in ‘96, and he became another pitcher. He could put the ball wherever he wanted. He always had a fastball, the slider was mediocre, the changeup was horrible, so that cutter really made him to what he is today.’’

“I used that pitch for 17 years, and used it well,’’ Rivera said. “I’m grateful to the Good Lord for letting me play in New York with those great fans."

Rivera, who spoke last, and easily the longest with his speech lasting nearly 25 minutes, including about four minutes in Spanish, eventually had to turn around and apologize to his fellow teammates for the length.

"I tried to carry the pinstripes the best that I could." – @MarianoRivera. @Yankees | @baseballhall | #HOFWKNDpic.twitter.com/6epDQzYfpl

No matter. It was a long day. But one seemed to mind.

Lee Smith talked about growing up and learning life lessons in tiny Castor, La., while Mike Mussina echoed the same sentiments about life in Montoursville, Pa. Edgar Martinez talked about the pride of becoming only the fourth Puerto Rican player to be elected. And Harold Baines cried when talking about the strength and support from his wife, Marla.

The funniest line of the day went to Martinez, who remembers being interviewed after fellow Hall of Famer Randy Johnson was traded from Seattle to Houston in 1998. Well, the quotes appeared in the paper, and Johnson was furious.

When he tried to explain himself to Johnson, Johnson looked at him, Martinez recalled, and threatened to drill him with a pitch the next time he faced him.

“Don’t worry, it will hurt,’’ Johnson told Martinez, “but only for a minute.’’

Harold Baines told the story about hitting his game-winning homer for the Chicago White Sox in the 25th inning against the Milwaukee Brewers in 1984.

When he came into the clubhouse, a reporter told him, “You got all of that one?’’

End of interview, and Baines had a nickname bestowed by his teammates.

“I’ve never been outspoken or said very much,’’ Baines said, “but I think of my dad and the lesson he passed onto me:

“Words are easy, deeds are hard.

“Words can be empty, deeds speak loudest, and sometimes they echo forever.’’

The greatest deed Sunday at Cooperstown belonged to Brandy Halladay, who had the courage to stand up, speak from the heart, and provide perspective into her husband, the late Roy Halladay, that few people really truly knew.

“It was such a tough situation,’’ Rivera said, “something you wish that nobody would have to go through. She had incredible strength.’’