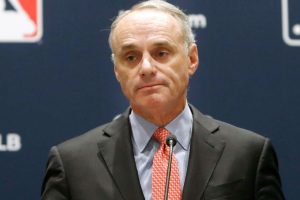 CHICAGO — Major League Baseball owners have not yet decided to lock out players if there is no new labor deal after the Dec. 1 expiration of the current one, commissioner Rob Manfred said Thursday, but he highlighted the folly of not doing so in 1994 that led to a crippling strike and added that “an offseason lockout that moves the process forward is different than a labor dispute that costs games.”

“I don’t think ’94 worked out too great for anybody,” Manfred told reporters as the quarterly owners’ meetings concluded. “I think we need to look at other sports. The pattern has become to control the timing of the labor dispute and try to minimize the prospect of actual disruption of the season. That’s what it’s about. It’s avoiding doing damage to the season.”

Labor strife was the main focus of owners, team presidents and league executives who met less than two weeks before the deal expires — and with little progress made toward a new one. While the league and MLB Players Association have met consistently — they had a bargaining session Wednesday, Manfred said, and are scheduled to have another Friday — they remain far apart from an agreement, having made limited progress on core economic issues.

“We understand, I understand, that time is becoming an issue,” Manfred said. “That’s a challenge. We’ve had challenges with respect to making labor agreements before, and we got a pretty good track record of overcoming those challenges. I can tell you from the clubs’ perspective, we’re committed to continuing to offer proposals and suggestions in an effort to get to an agreement before December 1.”

MLB’s 26-year streak of labor peace — which came on the heels of the ’94 strike that resulted in a canceled World Series — is in jeopardy after a rocky five-year period during which players chafed at the average salary in the sport dropping as pre-COVID-19 revenues spiked. The union has pursued a wide swath of changes, from lifting the competitive-balance tax threshold to paying younger players more to disincentivizing losing by penalizing teams that currently benefit from doing so with high draft picks. The league, which is pursuing expanded playoffs and other on-field changes, offered a core economics proposal in August that was roundly dismissed by the union as dissatisfactory.

The chasm between the parties played out in public during negotiations for how to shape the 2020 season, which was delayed for months at the beginning of the pandemic. After multiple proposals both ways and late-stage attempts to strike a deal, Manfred, as was his right from the March agreement between the sides, imposed a 60-game season.

“The focus on 2020, I think, has been excessive,” Manfred said. “I’ve been in charge of labor in this industry since 1998. Every single time, I have found a way, we have found a way, to make an agreement and keep the game on the field. You know, one sort of mid-term negotiation in the middle of a crisis of pandemic — I just don’t put that much weight on it. Like I said, we’ve had very, very difficult situations in the past. We’ve found our way through them. We’ve got great people. I think we’re gonna find our way through this one, too.

“We never let personalities or what has happened in the past affect our pursuit of the most fundamental goal,” he added. “That is to make an agreement. I regard that as a essential aspect of professionalism when it comes to being a labor negotiator. I really do. And I know that applies across the board with respect to the people involved in the process — at least from our side.”

Manfred declined to speak specifically about the negotiations, saying it would not be “helpful to the process right now.” He did say: “I think the best thing for the clubs and the fans is to do everything humanly possible to make an agreement,” adding: “I left a pretty good job with a pretty good future to try to get this industry to the point where we can make deals without labor disputes. I don’t think there’s anybody who understands any better than I do that from the perspective of the fans, they don’t want a labor dispute, and that’s why our No. 1 priority is to make a deal.”

Among the other subjects covered at the owners’ meetings:

• The adoption of a pitch clock in major league games feels more and more inevitable after a presentation by the league’s competition committee highlighted how it shaved more than 20 minutes off of games while seeing increased offense.

“The pitch timer experiment in the Cal League was one that the owners remain very interested in because of the success,” Manfred said, “and frankly, we’ve seen some of the same outcomes in the Arizona Fall League.”

• Fear about financial issues with regional sports networks trickling down to teams that rely heavily on local television money has grown significantly inside the sport and were a talking point among owners at the meetings.

“We see what’s going on with respect to the RSNs as a problem that needs to be solved but an opportunity that needs to be seized as well,” Manfred said. “And clubs (are) really supportive of aggressive action to make sure that we are reaching our fans in the most effective way possible.”

• The Tampa Bay Rays made a proposal to the league’s powerful executive committee on its split-city plan that would have it spend half the season in the Tampa-St. Pete area and the other half in Montreal. The council, Manfred said, didn’t make a decision on its viability “because of the press of other business. It’s a complicated topic.”

• The Oakland Athletics continue to look into Las Vegas for potential relocation while pursuing a simultaneous path toward staying in Oakland with a new stadium.

“If the industry could speak,” Manfred said, “I think the industry is satisfied with the effort that’s being put forth both places.”

• Manfred was open to the possibility of using a pre-tacked baseball as soon as the upcoming season after the league began enforcing foreign-substance rules in the middle of the 2021 season.

“I think we will be far enough along that there will actually be, I’m hoping, live-game testing in spring training,” he said. “We could be in a position to use a new ball next year. Maybe it’s going to be ’23 instead, but we’re continuing to work on that project and had made real progress. The trick is tackier but not so tacky that it’s Spider Tack.”

• After the meeting about diversity, equity and inclusion, Manfred said he planned to empower Michael Hill and Tony Reagins — two former general managers now working for the league who are Black — to push initiatives in a league whose ownership and executive ranks are almost exclusively comprised of white men. Having not run a team himself, Manfred said, “there’s a little credibility gap sometime, and I’ve got two great guys that I think can be really helpful on that topic.”