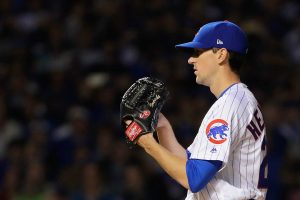 Hendricks didn’t get high marks for his start Sunday night vs. the Braves: He allowed four first-inning home runs, becoming the first Cubs pitcher and ninth pitcher in MLB history to do so.

The Cubs started a comeback after that on the power of two Anthony Rizzo home runs, but they were still down big, 7-3, in the early part of the game.

Hendricks is the team’s de facto ace after Chicago traded Yu Darvish this past offseason. Chicago will need more from its rotation this year given the lineup’s struggles with runners on base and in scoring position. Consider this a missed opportunity for Hendricks in a big spot to give his dudes a lift.

One start won’t hurt, but Chicago will be probably be locked in these types of games for the duration of the 2021 season.