Home » MLB » Kris Bryant’s return to Rockies on hold and he won’t play vs. Twins

Kris Bryant’s return to Rockies on hold and he won’t play vs. Twins 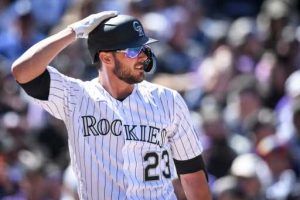 The Rockies had hoped that the left-fielder would be ready to join the team for its weekend series here against the Twins, but Bryant’s return has been delayed. Manager Bud Black said Bryant “is close” but not quite ready to rejoin the big-league team.

Bryant is still trying to get back into playing shape after being on the injured list with a sore lower back beginning April 26. He attempted to come back but played in just two games before going back on the IL on May 23.

“No setback at all,” manager Bud Black said prior to Friday night’s game at Target Field. “We’re just looking at it more realistically.  He probably needs just a few more games to get ready.”

Bryant, who signed a seven-year, $182 million free-agent contract with Colorado and was expected to be its best offensive player, has played in only 17 games. He might return next week when the Rockies open a six-game homestand vs. the Dodgers and Diamondbacks. There are no guarantees, however, that Bryan will be ready by next week.

The Rockies believe he still needs more at-bats and they want to see him run the bases during game competition.

Black, however, continues to stress that Bryant’s lower back is OK.

“He’s good, the back feels good,” Black said. “We are going to get him through this weekend and then we will adjust.”

Since coming off the injured list on June 1, Senzatela is 1-1 with a 4.24 ERA in five starts. He pitched very well in his last start, allowing one run on six hits, with three strikeouts and two walks in Colorado’s 8-3 win over San Diego at Coors Field. The right-hander has never faced the Twins.

Archer took the loss last Sunday versus the Diamondbacks. He allowed two runs on three hits and struck out three while walking none in four innings. Archer has been pitching relatively well, but he has not been going deep into games. Archer began his comeback in 2021 after his June 2020 surgery for thoracic outlet syndrome. The right-hander is 2-1 with a 3.94 ERA in three starts vs. Colorado.

Trending: Since May 1, second baseman Brendan Rodgers is hitting .304 (56-for-184) with six home runs, 14 doubles, and two triples (entering Friday night’s game). He’s tied for the eighth-most extra-base hits in the National League across that span.