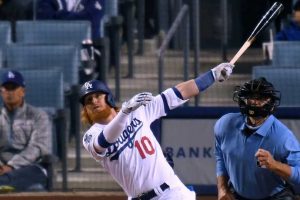 Things got a little chippy in LA on Wednesday night.

Turner didn’t just sit idly by and let a man’s night be ruined with broken chips and a messy sweater. Oh no: Turner did right by the fan, ordering him a new dish of nachos after the bomb.

“I went in the clubhouse after and asked one of the guys to replace his nachos,” Turner said. “I ruined a meal for him, so I had to replace them.”

The third-inning blast put the Dodgers ahead 3-0, but LA would brie-ze through the Rockies, winning 4-2. The Dodgers have been making Swiss cheese of competition this year, being the first to 10 wins in the majors.

Sorry for this story. It’s a bit … cheesy.