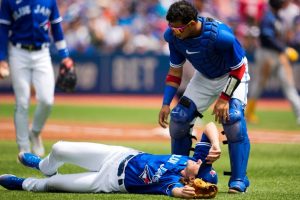 TORONTO — Blue Jays right-hander Kevin Gausman left Game 1 of Saturday’s doubleheader against Tampa Bay after he was hit in the right foot by a line drive from Rays shortstop Wander Franco.

Franco’s liner, which had an exit velocity of 100 mph, struck Gausman and ricocheted to catcher Gabriel Moreno, who retired Franco at first to end the inning, leaving the bases loaded.

The team announced that Gausman had a right ankle contusion and X-rays came back negative.

Gausman stumbled forward and fell face down in front of the mound after being struck. He received attention from the trainer before getting to his feet and slowly walking off the field.

Gausman signed a five-year, $110 million contract with the Blue Jays last offseason. He came into Saturday’s start 6-6 with a 2.93 ERA.

Gausman allowed four hits in two scoreless innings before departing. He walked one and struck out three.

Right-hander Casey Lawrence, who joined the Blue Jays as the 27th man for Saturday’s doubleheader, replaced Gausman in the third.