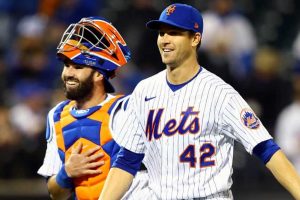 ST. LOUIS — I am a bit disappointed.

Jacob deGrom, the best pitcher in baseball, was supposed to start for the Mets on Tuesday night at Busch Stadium, but he was scratched a few hours before the scheduled first pitch. He felt tightness on his side, and there are no chances taken with the best pitcher in baseball. An MRI revealed inflammation on his right lat, and as MRI news goes, that’s definitely on the good side. The plan for now is for the right-hander to rest for a few days without throwing.

Selfishly, though? I was at the ballpark covering the game and had grand plans to watch deGrom from several different vantage points around the stadium. I had to shelve that idea. I didn’t even get to watch a game, either, as the threat of light rain postponed the contest.

As writers, of course, we are not pulling for any player or team. We are, though, rooting for memorable stories. We are hopeful for a glimpse of greatness, a call back to growing up as baseball fans reading stories and legends of baseball immortality.

The books I checked out from the local library were about Sandy Koufax and Willie Mays, about Bob Gibson and Babe Ruth. These were the baseball heroes who captured my attention and fed a lifelong obsession with the sport. These were the legends I wished I could have watched in person.

I can’t help but think of that quote from Andy Bernard in the series finale of “The Office”: “I wish there was a way to know you’re in ‘the good old days’ before you’ve actually left them.” And, sure, maybe it only loosely applies, but it was a good reminder to savor our opportunities to watch the great players perform at the peak of their abilities.

Will deGrom — did we mention he’s the best pitcher in baseball? — wind up in the Hall of Fame? He’s on a Cooperstown pace, for sure, but we are not speculating on the future right now. We are appreciating today.

And since the start of the 2018 season, deGrom has made 81 regular-season starts and posted a 1.99 ERA, with a 2.21 FIP and 22.2 bWAR. These numbers are easily the best in baseball in that span, and they put deGrom in historic company.

Using Baseball-Reference’s essential Stathead service, I tried to find how many pitchers since 1920 had spans of at least 81 starts with an ERA under 2.00. It’s a short list.

That’s one hell of a list, folks. Five Hall of Famers, one future Hall of Famer (Kershaw) and deGrom. I was hoping to do an 82-game search after watching him Tuesday night. Oh well.

Because here’s the thing: As good as he was in 2018-20 — when he won two NL Cy Young awards and finished third the other year — he’s been even better so far in 2021. Sure, it’s only five starts, but he’s been incredible, even by his lofty standards.

His 59 strikeouts ties the MLB record for most strikeouts through a pitcher’s first five starts to the season. The guy he tied? Nolan Ryan. Only six players since 1950 have a better ERA through five starts than deGrom’s 0.51. That list includes Pedro Martinez (the Montreal years), peak Fernando Valenzuela and Don Sutton.

Watching deGrom in person right now is watching greatness, an artist at the peak of his craft. It’s watching Dave Chappelle on the mic at a small comedy club. It’s watching a Phish concert live during the 1.0 era. It’s watching Simone Biles dominate the 2016 Olympics from inside the arena.

Watch the broadcasts when deGrom pitches, of course, but if you can get to the ballpark when he’s on the mound, make it happen. If we’re lucky and this skipped start is just a hiccup cured with a little rest, he’ll make 27 or 28 more starts this season.