Home » ‘It’s going to be a good test for us’: Padres meet reigning World Series champ Dodgers for first time in 2021 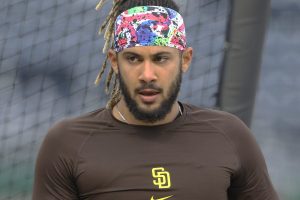 There’s still no such thing as a big series in April. That doesn’t mean the three games between the Dodgers and Padres this weekend in San Diego can’t be the prelude to something memorable.

The eight-time division champ and reigning World Series champion Dodgers and upstart Padres will play 19 games this season, starting Friday night and culminating Sept. 30 at Dodger Stadium, which could either be a playoff tuneup for the Dodgers or a pitched battle for the National League West title.

The Padres know work must be done to ensure it’s the latter.

The Dodgers have not disappointed, racing out to an 11-2 start, their depth as suffocating in reality as it was enviable on paper. The Padres have played less consistently, yet nonetheless have won nine of their first 14.

A peek at the three-game set at Petco, and the greater implications for what could develop into a salacious rivalry:

The Dodgers boast three MVP and three Cy Young Award winners, while San Diego counters with one Cy Young honoree and a $640 million left side of the infield. In Mookie Betts ($365 million), Fernando Tatis Jr. ($340 million) and Manny Machado ($300 million), these teams combine for three of the eight highest-paid players in baseball history.

Yet April has not been kind to many of their biggest stars.

Betts? He’s missed six games with a bad back.

Tatis? The Padres’ dynamic shortstop is expected to be activated for Friday’s series opener, having averted surgery following a subluxation of his left shoulder. Tatis had just three hits in 16 at-bats before his injury, and suffice to say, every swing and every dive in the field won’t come with some degree of clenched teeth for Padres fans.

Blake Snell? Baseball’s martyr after his early hook from Game 6 of the World Series against these Dodgers, he’s yet to get past five innings in three starts with the Padres, walking eight in 10 1/3 innings and only recording two outs in his last start at Pittsburgh.

Given good health, all the aforementioned stars should find their level soon.

The Padres unfurled one of their prized pitching prospects, Ryan Weathers, in their NL Division Series matchup against the Dodgers, making his major league debut in the postseason. Now, the seventh overall pick will mark another milestone against the Dodgers — his first career start.

The Dodgers, though, have their firepower lined up — Walker Buehler against Weathers on Friday, Clayton Kershaw vs. Yu Darvish on Saturday and Trevor Bauer vs. Snell in the finale.

Perhaps it was the Padres’ acquisitions of Darvish and Snell that inspired the Dodgers to pay Bauer some $34 million per year over the next three years, ensuring the Padres would not outflank them in the rotation.

The reigning NL Cy Young winner has not disappointed — 29 strikeouts to just five walks over 20 innings, a 0.60 WHIP, plenty of unsettling swagger. Sunday’s outing will be an intriguing early test against an opponent they signed him to beat.

This “rivalry” hasn’t had much spice since 1996, when the Padres swept the Dodgers on the final weekend of the season to claim the NL West title (the Dodgers shrugged and accepted the wild card, and then both went 0-6 in the NLDS, anyway). They both advanced to the playoffs in 2006, too.

But with the Chargers departed to L.A. and the town all to themselves, the Padres’ methodical build has reached go time. Sure, they may never surpass the Giants as the Dodgers’ primary rival.

They do have a legitimate chance to unseat them atop the division. Of course, the same was true last year, but the Dodgers won nine of 13 against the Padres, including the 3-0 NLDS sweep.

This weekend provides the first chance to reverse eight years and running of looking up at their neighbors to the north.