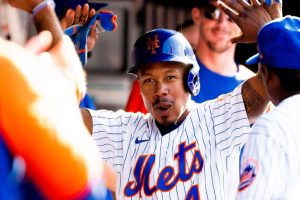 IN HIS EIGHT seasons in the big leagues, New York Mets outfielder Terrance Gore has never hit a home run. He has just one career RBI. But he does lead baseball in one very important category: World Series rings.

With three, Gore is tied with Madison Bumgarner for the most rings among active players in the majors, and has more than the entire Mets clubhouse combined. With his team among the National League favorites heading into the 2022 postseason, the journeyman pinch-running specialist is looking to add to his collection — with a lofty goal in mind.

Brady, of course, owns seven rings as a future Hall of Fame quarterback for the New England Patriots and Tampa Bay Buccaneers, but Gore — a 31-year-old speedster known only to the most die-hard baseball fans — finds himself nearly halfway there.

“I wish I had that many World Series rings,” All-Star Mets shortstop Francisco Lindor says. “I’m a little envious.”

There’s a catch: Gore has never actually played in a World Series game. Since the Kansas City Royals drafted him in the 20th round in 2011, Gore has put together one of the most unique careers in sports history, a playoff base stealer for hire, often added to rosters in late September or October as one of the game’s fastest runners, deployed in the late innings of close games. He’s been a key contributor along the way, but has yet to appear in the Fall Classic.

In June, Gore joined the Mets, his fourth team. In eight games, Gore does not have a hit in three at-bats, but has stolen three bases and has not been caught once. The Mets hope, come October, that Gore can help the team create runs on the basepaths while providing some of the luck he’s brought the past two seasons to the Los Angeles Dodgers and Atlanta Braves, plus the Royals in 2015, all of whom won the World Series with Gore on their playoff rosters.

“Everyone knows when I go out there what I’m doing,” Gore says. “It’s like cat and mouse. Here we go. There’s no hiding.”

In 2014, Gore was frustrated with his progress. As a kid, Gore had envisioned a career like Ichiro Suzuki’s or Juan Pierre’s. But in his fourth year in the Royals organization, he wasn’t making much of a mark as an everyday player at High-A Wilmington, hitting .218/.284/.258 with no home runs and 36 stolen bases in 89 games. As he struggled in professional baseball, his ambitions shrunk, and he found himself dreaming not of MLB success, but of simply making a living, in the minors.

With a child on the way, though, Gore also considered hanging up his spikes altogether.

“I didn’t have a plan,” Gore says. “I knew I needed to do whatever it took to provide for the family.”

Gore didn’t see a path to the big leagues. He wasn’t developing as an all-around player and as his teammates got younger and younger, it felt like his window was closing. Gore routinely talked to his agent, Jay Witasik, who had pitched 12 years in the major leagues, about leaving the sport.

As he wavered, Gore grabbed dinner with former Royals slugger Mike Sweeney, who was working with the team as a special assistant. Sweeney pushed back on Gore’s plans to leave baseball, imploring Gore to stick with it for another year — an opportunity might be coming soon.

That opportunity came a few months later in early August when Gore got the call to join the Triple-A Omaha Chasers, where the Royals wanted him to pinch run and steal bases against a higher level of competition. The plan was for Gore to come up to the big leagues and be a pinch runner for the team’s postseason run.

“I had zero idea,” Gore says. “I stole bases down there, but I just did it because it was something I was good at.”

Just a month later, Gore made his major league debut against Cleveland, pinch running for the Royals just 26 days after his last game in Single-A.

“It was like he was shot out of a cannon every time he took off,” says ex-major leaguer Rusty Kuntz, then the Royals’ first base coach. “I grew up with Vince Coleman, Rickey Henderson, Tim Raines, the guys in the Hall of Fame with that kind of speed, and this guy is right there.”

“I was just hoping and praying to God, do not fall on your face in the middle of the base path,” Gore says. “I am notorious for tripping and I’ve come really close to stumbling, so I was like, do not do this on TV.”

While the Royals did not win the World Series in 2014, they raised the trophy in 2015. That year, Gore stole a base in Game 4 of the ALDS against the Houston Astros after spending the majority of the season in Double-A. Gore says he does not remember much of his first two postseasons because he blacked out from the pressure. Still, the thrill of success in the majors got him hooked.

“There was no turning back. Once you get a taste of it, it’s almost like a shark,” Gore says. “You get the taste of that blood and you’re like oh man, I want to keep going.”

SINCE THEN, GORE has accepted his role as a premier pinch runner and shifted his training strategy accordingly, de-emphasizing hitting to focus on improving his speed through sprints and flexibility while working on reading pitchers on the mound. Perhaps the only comparable career in MLB history is that of Herb Washington, a four-time All-American sprinter at Michigan State who played two years for the Oakland Athletics, stealing 31 bases without a single at-bat and winning a championship in 1974. Gore’s legs alone got him his first World Series ring, and leaning all the way in like Washington seemed his best course forward.

“I’m just going to ride this wave,” Gore says. “Be really freaking good at it and see where it takes me.”

In 2018, the Royals shipped Gore to the Chicago Cubs, who put him on the postseason roster for the wild-card game, where Gore stole a base and scored a run in a Cubs loss to the Colorado Rockies. He returned to the Royals in 2019, getting his most extended time in the majors to date, playing 37 games while hitting .275/.362/.353 and stealing 13 bases before being sent to the New York Yankees and finding himself back in the minor leagues.

Ahead of the 2020 season, Gore signed with the Dodgers, for whom he appeared in two regular-season games before being added to the 28-man roster for the wild-card game and the NLDS. Dodgers manager Dave Roberts said it would “be pretty costly” to not have Gore on the playoff roster, despite the outfielder not appearing in any games. And when the Dodgers won the World Series, Gore got his second championship ring.

Gore next signed with the Braves, who did not call him up during the 2021 regular season. But when Atlanta reached the NLDS, Gore joined the roster, making one appearance as a pinch runner. And when the Braves won the World Series, Gore got his third championship ring, his second in a row.

Noticing a trend in how teams used him, Gore and Witasik came up with a different free agent strategy for 2022, deciding not to sign with a team until halfway through the season. The approach allowed Gore to gauge which interested teams had a shot at making the postseason and where he could maximize his impact. They knew the same teams interested in his speed in February would be just as interested in June ahead of a postseason run.

“For 99.9 percent of how things work, you get the player the deal and they develop throughout the season. But with Terrance, he’s not that guy,” Witasik says. “He’s a once-in-a-generation type guy with his speed and skill set.”

Gore feels the pressure every time he takes the field, knowing he’ll be called onto the basepaths in key situations. To prepare for these moments, he reads scouting reports that break down the pickoff moves and windup timing for each pitcher on the opposing team, studying video of how each of them holds runners on base, examining everything from their feet to their eyes.

“I’ve embraced it now. It’s got me three World Series rings so why not just keep on chugging along and see how far I can go.”

He might never win as many rings as Tom Brady, but with another on the line this October, he’s feeling pretty ambitious. If he wins a fourth ring, and his third straight?

“Put me in the Hall of Fame,” Gore says with a laugh.