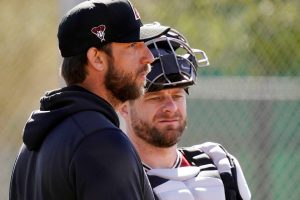 SCOTTSDALE, Ariz. — It was just one start in a meaningless spring-training game Thursday afternoon, against a lineup that featured only two major-league veterans, but for Arizona Diamondbacks ace Madison Bumgarner, it meant much, much more.

It was the first sign that maybe, just perhaps, Bumgarner’s career isn’t on the downslide after all.

Bumgarner, coming off a horrific season, with the Diamondbacks still on the hook for $79 million over the next four years, showed that last year might have been a fluke.

Bumgarner, the rodeo-loving cowboy in spikes, faced seven Los Angeles Angels batters, and struck out six of them. He threw 33 pitches, and only one ball was put in play, generating 11 swings-and-misses.

Bumgarner still doesn’t have the same velocity from his days as a World Series hero with the San Francisco Giants, with his fastball sitting at 90 mph and hitting 91 mph just once, but he unleashed a torrent of curveballs and cutters that left the Angels looking silly.

'WE'RE IN A NEW YEAR': Blake Snell focused on Padres, not dwelling on World Series nightmare

BREWERS: Jackie Bradley Jr. deal is another sign the club cares about winning

“Pretty happy with where we’re at for the first one of the spring for sure,’’ Bumgarner said. “Maybe I didn’t feel as good as the line showed, but I felt pretty darn good."

Bumgarner realizes that his 94 mph fastball may never return, but he has learned to adapt, taking a page out of CC Sabathia’s playbook and tormenting hitters with his finesse. He threw 21 cutters and curveballs, with 15 for strikes.

“I was facing a lot of guys with not much experience off me,’’ Bumgarner said, “so I’m not going to get too high on it. But it definitely felt good how it went.’’

Still, featuring this new version of himself, and judging by his spring outing, this may work.

Certainly, outings like this could help put last year’s nightmare behind when he produced the worst season of his career, leaving the D-backs to wonder if they just flushed $85 million down the drain on a mid-sized payroll.

Bumgarner isn’t going to sugarcoat what happened last year. He stunk. He went 1-4 with a 6.48 ERA. He permitted a whopping 66 baserunners in just 41 2/3 innings.

“I think everybody certainly remembers what happened last year, myself obviously included,” Bumgarner said this spring. “I underperformed as bad as anybody. Maybe worse than anybody.

Bumgarner isn’t making excuses for last year, but last year’s shutdown duped him. When he retreated home to his North Carolina ranch, he really didn’t believe baseball would return. He figured the next time he’d be pitching was in 2021.

Instead, the 60-game season started. After he had halted all baseball activities, he wasn’t ready when it began — and paid the price.

The velocity on his fastball dropped to a career-low 88.4. His command was brutal. He didn’t begin resembling his old self until the final two starts of the season.

“The only thing I wish I would have done different last year was kept it at a steady pace,’’ Bumgarner said, “instead of getting way up here and then dropping back down and then getting way up. We didn’t really know what to plan for. I was trying to take it days and weeks at a time instead of staying somewhere in the middle. I think that would have been more beneficial.

Yet, with the dominance he showed Thursday, knowing his fastball was not needed to make hitters look silly, all of those doubts and misgivings have been replaced by everlasting hope.