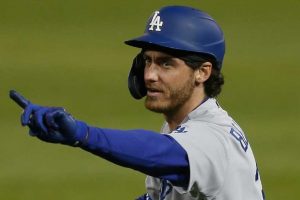 The reigning World Series champion Dodgers are dealing with negative injury news: Center fielder Cody Bellinger will be out longer than expected.

The 2019 National League MVP was injured April 5 when A’s pitcher Reymin Guduan stepped on Bellinger’s lower left leg while Bellinger was beating out a ground ball to first base.

Here’s everything we know about Bellinger’s injury and the latest news on when he may return to the field.

What is Cody Bellinger’s injury?

Cody Bellinger has a hairline fracture, or break, in his left fibula, or lower leg. A hairline fracture is also known as a stress fracture as pressure or force on a bone can cause a small crack. The injury resembles a deep bruise, and indeed the Dodgers first said Bellinger suffered a calf contusion.

The injury occurred on this play April 5 in Oakland.

Dodgers manager Dave Roberts told reporters April 16 that after Bellinger hit a “plateau” in his recovery, a scan of the injured area was taken and that is when the fracture was discovered.

How long will Cody Bellinger be out?

Roberts said he didn’t know when Bellinger could return to play, but he also said the injury is no longer considered a “day-to-day thing.” (Per MLB.com)

Bellinger was eligible to be activated from the 10-day injured list as early as April 16; now he will just continue with his rehab.

“Now it’s just more of getting that thing healed up, and when he’s ready to go, he’ll be back with us,” Roberts said, per MLB.com. “He’s just rehabbing and doing everything he can to join us as soon as possible.”

Chris Taylor has been Bellinger’s primary replacement in center field, but Mookie Betts and A.J. Pollock have also made starts at the position.