GM Cashman: Yankees ‘as bad as we can be’ 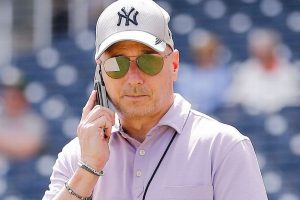 NEW YORK — Yankees general manager Brian Cashman isn’t beating around the bush about the performance of the Bronx Bombers.

“We suck right now,” Cashman said ahead of Tuesday’s game against the Los Angeles Angels at Yankee Stadium. “As bad as we can be.”

However, for the third time this season, Cashman offered support behind manager Aaron Boone and the coaching staff.

Cashman shifted the blame away from Boone toward himself.

“It’s easy from my chair to say, ‘Let me throw something overboard to just satisfy the masses.’ It’s harder to actually stick with what you’ve got because you believe in it,” he said. “These people care. They’re working their ass off. They’re really good at what they do. We’re not getting the results. I’m the head of baseball operations. That’s more on me than them.”

The Yankees are coming off their fourth straight loss, including a three-game sweep by the Boston Red Sox and Monday night’s loss to the Angels. The 40-38 Yankees are in fourth place in the American League East, 7 1/2 games behind the first-place Red Sox. Cashman said the team could be a seller rather than a buyer at the trade deadline if its performance fails to turn around.

Owner Hal Steinbrenner has not been happy with the team’s struggles so far this year, Cashman said. The Yankees currently boast the second-largest payroll in the sport at $142,556,795 behind the top-spending Los Angeles Dodgers at $215,958,616.

“Everybody is frustrated by this,” Cashman said. “Anybody who cares about this franchise, no one cares bigger than the owner because they’ve invested in it. It’s a legacy, and he’s not getting what he deserves and what he paid for. So he’s frustrated as well.”