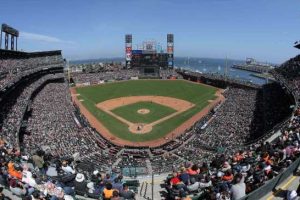 The San Francisco Giants will celebrate Pride Month by displaying Pride colors on the right sleeve of their home jerseys and on the “SF” logo of their caps for Saturday’s game against the Chicago Cubs, an unprecedented move in Major League Baseball’s ongoing inclusion efforts.

Pride Month — a tribute to the Stonewall Uprising of 1969, a major event in the advancement of LGBTQ+ rights in the United States — is celebrated every June. The new Pride logo incorporates 11 colors, including the original six Pride colors to signify inclusion and progression (red, orange, yellow, green, blue and purple), plus black and brown to recognize LGBTQ+ people of color, and light blue, pink and white to recognize people who are transgender.

Billy Bean, MLB’s first ambassador for inclusion, will take part in Saturday’s events at Oracle Park, where the palm trees in Willie Mays Plaza will be wrapped in the 11 colors of the Pride flag. The Oracle Park scoreboard will also display Pride colors throughout June.

“We are extremely proud to stand with the LGBTQ+ community as we kick off one of the best annual celebrations in San Francisco by paying honor to the countless achievements and contributions of all those who identify as LGBTQ+ and are allies of the LGBTQ+ community,” Giants president and CEO Larry Baer wrote in a statement as part of the team’s announcement on Tuesday.

Giants manager Gabe Kapler said he is “very proud that the San Francisco Giants are taking this step, very proud to be a part of it, and looking forward to the impact and the support that we can provide for the LGBTQ+ community.”