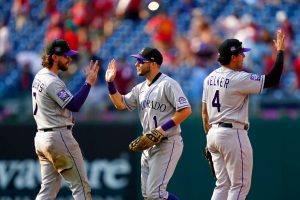 Garrett Hampson played hero on Sunday afternoon — twice — to give the Rockies a rare road series win at the Phillies.

Colorado won, 5-4, with Hampson blasting two home runs at Citizens Bank Park. He erased a 2-0 deficit in the fifth with a three-run blast. Then Hampson put Colorado ahead in the seventh with a two-run homer.

“He took the game over,” Rockies manager Bud Black said.

The Rockies (66-78) continue their lengthy road trip on Tuesday with a three-game set at Atlanta. On Sunday, a collective team effort gave Colorado its third win over Philadelphia in four days.

Rockies’ right-hander Ryan Feltner, in his second career MLB start, struggled in the first with a pair of walks issued to Odubel Herrera and Bryce Harper. J.T. Realmuto’s RBI double made it 1-0.

Feltner settled in to retire a stretch of seven consecutive Phillies but he ran into more trouble in the fourth. Feltner gave up a walk and two hits — punctuated by an RBI single from Philadelphia starting pitcher Aaron Nola. Feltner left the game after 81 pitches (44 strikes) and a 2-0 Colorado deficit.

“(Feltner’s) strike zone efficiency was much better. It’s not where it needs to be by any means,” Black said. “He showed signs of improvement and something to work with. I’m excited and happy about that.”

Hampson brought Colorado back on a 0-2 pitch that he smashed 376 feet to left — scoring Elias Diaz and Colton Welker — for the Rockies’ first lead.

“A big hit for our offense,” Hampson said. “It was good to come through right there.”

Colorado’s bullpen kept Philadelphia off the board until the sixth when reliever Ashton Goudeau threw a wild pitch that scored Realmuto and tied the game, 3-3. But Hampson stepped up, again, with a 356-foot shot off reliever Hector Neris to left that brought home Diaz.

Harper launched an eighth-inning home run to make it 5-4. But Rockies’ closer Carlos Estevez kept the Phillies scoreless in the ninth.

“These games are huge for us, too. We want to play spoiler and play these teams tough,” Hampson said. “Especially on the road. It means a lot. To come in here and take three out of four in Philadelphia was pretty awesome.”