Home » From ‘Redlegs’ to ‘Red Scare’ to ‘Twilight Zone’: Strange trip of the Cincinnati Reds’ nickname

From ‘Redlegs’ to ‘Red Scare’ to ‘Twilight Zone’: Strange trip of the Cincinnati Reds’ nickname 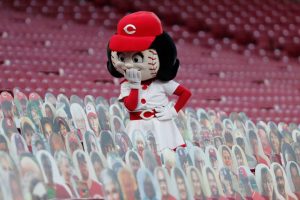 The Cincinnati Reds announced on April 9, 1953, a few days before the first game of the season, that it had changed the team’s name from the Reds to the Redlegs. The team issued no explanation why it made the decision. But an Associated Press story said it had dropped the “Reds” name to dissociate it from communism and the Red Scare hysteria.

Cincinnati general manager Gabe Paul later said the team “wanted to be certain we wouldn’t be confused with the Russian Reds.”

The Soviet Union spread communism through Eastern Europe immediately after World War II and then it expanded to Eastern Asia, where communist North Korea and democratically ruled South Korea were at war until July 27, 1953.

'IT'S CRAZY HOW GOOD IT FEELS': Nationals open with dramatic Juan Soto walk-off

Conservative politicians, including U.S. Sen. Joe McCarthy, stoked the “Red Scare” by telling Americans in February 1950 that he had a list with more than 200 names of Communist sympathizers working in the state department. He never produced the list.

McCarthy smeared his political rivals as communists who were intent on overthrowing the government. He later chaired a subcommittee that identified suspected “reds,” regardless of whether any evidence existed, who were fired from their jobs or sentenced to prison.

The Reds got caught up in that hysteria, Cincinnati Reds team historian Greg Rhodes said.

“The word ‘red’ was all over the front page,” Rhodes said, “and it was always bad news.”

FILE – In this Feb. 10, 1955, file photo, television writer Rod Serling, right, huddles with producer-director Fielder Cook, backstage at a New York rehearsal for a precedent-making telecast of Serling's "Patterns," on Television Theater. Years before he journeyed to "The Twilight Zone," Serling made a brief detour to the strike zone, writing a comedy about baseball. (AP Photo/Bob Wands, File) (Photo: The Associated Press)

Dozens of professional, college, and high school sports teams have dropped the names of their mascots in recent years after protests that they were offensive to Native Americans. The Washington Redskins became the Washington Football Team. This is the last year that the Cleveland Indians will use the Indians name.

The Cincinnati baseball team, which remained the Redlegs through the 1959 season, may be the only professional team to change its name because of political reasons. In changing their name to the Redlegs, one writer said, the baseball team preferred to associate themselves with slavery over communism because the name “redleg” was itself a derogatory term given to poor white slaves living in the Caribbean – though the term had fallen out of use long before the 1950s.

The Cincinnati Red Stockings became baseball’s first professional team in 1869. The name was shortened to the Reds but remained unattached with communism – or quality baseball — for most of the next six decades. Fans often referred to the team as the “Redlegs,” Rhodes said.

The best team during that time was the New York Yankees, who were managed by Joe McCarthy during the 1930s and 1940s.

By 1950, one Joe McCarthy was beginning his infamy as a red-hunting senator while the other was finishing his hall of fame career by managing the Boston Red Sox, whose name remained untainted during the Red Scare. Boston fired McCarthy in July of that season. There’s no evidence that politics had anything to do with his dismissal.

To sportswriters and fans, the Reds remained the Reds and not the Redlegs.

“Some sportswriters never accepted it. They never called the team the Redlegs,” Rhodes said.

Fans responded not with flag-waving applause but with ridicule.

“It was rather ridiculous and far-fetched really for anyone to connect the ballplayers with Communists,” Cyril Rolf told the Cincinnati Enquirer in July 1953. “It would be comparable to my changing my name because somebody else with the same name committed a crime.”

In 1955, Rod Serling, who later became famous as the writer and narrator of "The Twilight Zone" television program, got his start in television working in Cincinnati during the early 1950s before moving to New York City.

On December 12, 1955, Serling wrote a comedy for NBC Matinee Theater about a Russian embassy staff worker named Mushnick who is being sent back to Russia because he spent too many afternoons watching the Brooklyn Dodgers play at Ebbets Field. Mushnick and a powerfully built bodyguard, Josef Bishofsky, hopped a train and travelled as far as their money could take them. They ended up in Cincinnati.

Bishofsky then wanted to turn himself in, but confused the Cincinnati Reds with the Russian reds. But Mushick told the team that Bishofsky was really a slugger named O’Toole and he ended up as the team’s leading home run hitter – until he was recognized by the Russians.

FILE – This March 1957 file photo shows Cincinnati Reds infielder Ted Kluszewski. Years before he journeyed to "The Twilight Zone," television writer Rod Serling made a brief detour to the strike zone, writing a comedy about baseball. The comedy is peppered full of references to Reds slugger Ted Kluszewski, Stan Musial, Willie Mays, Duke Snider and other stars of the day. (AP Photo/File) (Photo: The Associated Press)

The program included Chuck Connors, a former MLB player who became the star of "The Rifleman" television program, John Banner, who later played Sergeant Schultz on "Hogan’s Heroes," and Hall of Fame manager Leo Durocher, who played the Reds manager.

The program aired once and then faded into obscurity until a script was found decades later.

The Cincinnati organization referred to its team as the “Redlegs” in press releases and other announcements. It kept “Reds” on the front of its jerseys until 1956 when home and away uniforms were redesigned. The organization removed “Reds” from its home uniforms and used a logo of Mr. Redlegs on road jerseys.

In February 1959, the team announced it was changing its name back to the Reds.

Two years later, the name again stoked cold war analogies when the Reds played the Yankees in the World Series.

Michael A. Musmanno, a Pennsylvania Supreme Court justice, wrote a letter to the team telling it to change its name because it would upset morale in the country if the Reds were to defeat the Yankees. It is, he said, “inevitable that one headline or more will scream, ‘Reds murder Yanks.’"

The Reds, however, kept their team name.

“We’ve been the Reds longer than the Communists have been Reds,” one team executive reportedly said.

Fortunately, for god and country, this did not happen.

The Yankees won the series, four games to one.

Chris Lamb, who is chair of the journalism and public relations department at Indiana University-Indianapolis (IUPUI), is author of a number of books, most recently Sports Journalism: A History of Glory, Face, and Technology. His email is [email protected]