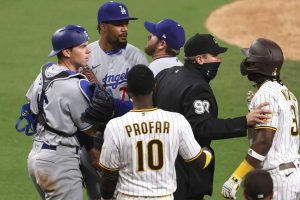 The atmosphere in San Diego on Friday was infinitely more October than April. The Dodgers were in town for the first of 19 “World Series games” this season vs. the division-rival Padres. The 15,250 fans at Petco Park, split into blue and brown camps, brought postseason energy.

Let’s hope that these teams are still battling for first place in the NL West in Game 19 on Sept. 30, because the opener of the season series — which the Dodgers won 11-6 in 12 innings — was electric.

Fernando Tatis Jr. announced his return in a big way

The San Diego shortstop missed just 10 days after appearing to suffer a serious shoulder injury. He came off the injured list Friday and immediately made up for lost time with a home run to center field against LA starter Walker Buehler.

The drive turned the intensity inside Petco up to 11.

Unfortunately for Tatis and the Padres, he struck out with the bases loaded to end the bottom of the 10th.

Manny Machado played on guts at the end

Machado appeared to hurt himself batting against LA closer Kenley Jansen in the bottom of the ninth. Machado stayed in and eventually drew a two-out walk to keep the game going. He then stole second and advanced to third on a wild pitch before scoring on Eric Hosmer’s two-strike, ground-ball single to center.

He was uncomfortable the entire trip around the bases but still managed to finish the game.

Both closers entered in a tie game

Jansen came on with two outs in the bottom of the eighth and the go-ahead run in scoring position after the Padres had rallied to tie. Melancon started the top of the ninth in a 5-5 game. Both relievers eventually gave up runs, which sent the game to extras.

But the closer usage showed how important the game was to the teams. Jansen was asked to get four outs, Melancon six. The game’s intensity also seemed to boost Jansen’s fastball. He was touching the mid-90s with it.

Don’t bet on that being the only dustup this season. The teams got together in the bottom of the 10th after Dodgers reliever Dennis Santana hit Jorge Mateo in the thigh with a fastball. The two exchanged glances and words. They wound up standing in front of each other but declined to do anything else. Their teammates didn’t need to work hard to hold them back.

There might have been more activity if the game wasn’t on the line at the time.

The Dodgers showed off their unparalleled depth

McKinstry has hit well enough to receive semi-regular at-bats. He has a .999 OPS in 46 plate appearances.

And while San Diego’s bullpen struggled late (more on that in the final item), LA gave the 11th and 12th innings to David Price, the $32 million left-hander who is the team’s No. 3 closer at the moment behind Jansen and Corey Knebel. Price earned the win with two scoreless frames, striking out four, one night after he notched a save against the Rockies.

Things got weird at the end

Padres manager Jayce Tingler put second baseman Jake Cronenworth on the mound to finish the 12th after the Dodgers scored three times against Tim Hill, who faltered in his second inning of relief. Hill was the Padres’ eighth reliever on the night. San Diego’s nine-man bullpen was short an arm because Craig Stammen worked three innings for a save Thursday afternoon in Pittsburgh.

Cronenworth was a two-way player in the Rays organization, so pitching him in this situation made sense. The odd part of the move was that San Diego starter Joe Musgrove had to come in and play left field because the Padres were also out of position players. Jurickson Profar moved from left to second in place of Cronenworth. And, because the ball finds you, as the baseball saying goes, Musgrove caught a line-drive sacrifice fly hit by . . . Price.

To add to the crazy, Cronenworth struck out Mookie Betts to end the inning.

And then Musgrove batted in the bottom of the 12th. Price struck him out.