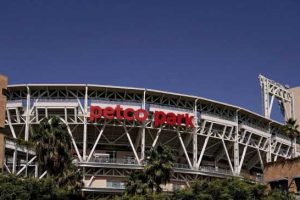 Elizabeth Merrill is a senior writer for ESPN.com and ESPN The Magazine. She previously wrote for The Kansas City Star and The Omaha World-Herald.

A woman who fell to her death at Petco Park while holding her toddler son last September died by suicide, according to a statement Wednesday from the San Diego Police Department. Authorities ruled her 2-year-old son’s death a homicide.

San Diego residents Raquel Wilkins, 40, and her son, Denzel Browning-Wilkins, fell around 3:50 p.m. on Sept. 25 as baseball fans were heading into the stadium for a San Diego Padres game against the Atlanta Braves.

Wednesday’s statement said detectives “conducted a thorough and comprehensive investigation that included dozens of interviews, reviewing of available video footage, and collecting background information to determine what led to the deaths.” It said the decision was made in consultation with the San Diego County Medical Examiner.

Lt. Adam Sharki said San Diego police will not release any further information on the case.

Dan Gilleon, an attorney who represents Wilkins’ parents and sisters, expressed disappointment Wednesday over the lack of information shared with the family by the San Diego police about the investigation and how they came to their conclusions.

Gilleon said a wrongful death lawsuit on behalf of Wilkins’ parents is pending against Petco Park and the city of San Diego, and that he planned to file a tort claim with the city in about a week.

Wilkins and her son were pronounced dead at 4:11 p.m., about 20 minutes after police were alerted. The pair had fallen from a dining and concessions area on the third-floor concourse — the equivalent of six stories high — to a sidewalk below on 200 Tony Gwynn Way, police said. The child’s father was also at the ballpark, police said. The father did not respond to an interview request from ESPN late last year.

In a previous statement, San Diego police officials called the deaths “suspicious,” and the department’s homicide unit was called to investigate. At least one witness told San Diego’s Fox 5 that Wilkins had jumped on a bench and was laughing before losing her balance and falling.