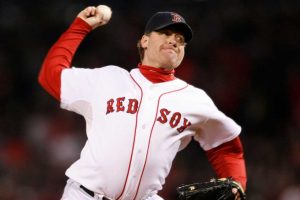 In a grievance-filled, 1,100-word screed posted to his Facebook account, Curt Schilling requested he be removed from Hall of Fame consideration in his final year of eligibility, reiterating his disdain for the news media and expressing disgust that his history of transphobic and violent statements are conflated with performance-enhancing drug users.

Schilling narrowly missed election to the Hall of Fame on Tuesday evening, getting named on 71.1% of 301 ballots, just 16 votes shy of the 75% required for induction.

It was Schilling’s ninth year of eligibility, and his vote share has nearly doubled since receiving 38.8% in 2013.

But Schilling’s upward trend in voting – not atypical for players whose statistical cases are shy of automatic – has come as his off-field conduct and apparent belief system has angered supporters. Schilling was fired from his role on ESPN’s Sunday Night Baseball in 2016 after posting an anti-transgender meme to his Facebook page.

HALL OF FAME: Nobody voted in for first time since 2013

In recent years, he has aligned with far-right extremists such as former Trump advisor Steve Bannon, expressed support for a meme that read “Rope. Tree. Journalist,” and most recently tweeted strident support for the group that stormed the Capitol on Jan. 6 in an attempt to overturn election results.

“sit back [shut up] and watch folks start a confrontation for [expletive] that matters like rights, democracy and the end of [government] corruption. #itshappening,” Schilling tweeted, in part.

Ballots for the 2021 election had to be postmarked Dec. 31, meaning Tuesday’s results did not reflect any potential blowback from his remarks on the Capitol attack, during which five people were killed.

His letter to the Hall also pulled few punches; notably, he seemed offended that his political views might cost him support and lump him in with Barry Bonds and Roger Clemens, who have slam-dunk statistical cases for the Hall of Fame yet are strongly tied to performance-enhancing drug use.

Like Schilling, they are in their ninth and penultimate year on the ballot, logging 61.8% (Bonds) and 61.6% (Clemens).

A record 14 blank ballots were submitted, according to the Hall of Fame, which is a form of protest vote voters have used in the past to suppress candidacies.

Voting is conducted by 10-year members of the Baseball Writers’ Assn. of America.

“Nothing, zero, none of the claims being made by any of the writers hold merit,” Schilling wrote in his message. “In my 22 years playing professional baseball in the most culturally diverse locker rooms in sports I’ve never said or acted in any capacity other than being a good teammate.

“I’ve certainly been exposed to racism and sexism and homophobia as it’s part of who human beings are. I’ve played with and talked with gay teammates. I’ve played with wife beaters, adulterers, assaulted, drug addicts and alcoholics. I’ve never hit a woman, driven drunk, done drugs, PEDs or otherwise, assaulted anyone or committed any sort of crime.

“But I’m now somehow in a conversation with two men who cheated, and instead of being accountable they chose to destroy others lives to protect their lie.  I will always have one thing they will forever chase. A legacy. Whatever mine is as a player it will be the truth, and one I earned for better or worse.

“Having said all that the media has created a Curt Schilling that does not and has never existed. It’s one of the things that has allowed me to sleep at night.”

A Hall of Fame representative did not immediately return a request for comment.