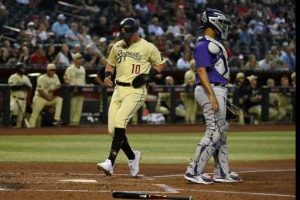 PHOENIX — A pitching duel in the desert between the Rockies’ Chad Kuhl and Arizona’s Merrill Kelly left no margin for error.

The Rockies learned that the hard way when the Diamondbacks ambushed reliever Carlos Estevez with two home runs in the eighth inning en route to a 4-1 victory Friday night at Chase Field.

Kelly nearly pitched the first complete game of his career, holding the Rockies to seven hits over 8 2/3 innings. Manager Torey Lovullo made a visit to the mound with two outs in the ninth after Elias Diaz singled to right. Lovullo, much to the crowd’s pleasure, left Kelly in. But when Brendan Rodgers whistled another single to right, Lovullo called in closer Mark Melancon.

Melancon promptly walked Sam Hilliard, loading the bases, before getting Jose Iglesias to ground out back to the mound to slam the door.

Estevez didn’t look sharp from the beginning of his outing. Pinch-hitter Jordan Ludlow nearly hit a homer to right, but it was foul by just a few feet. Estevez ended up striking out Ludlow, but Daulton Varshow hammered a solo shot to deep right.

The Rockies went 5-1 on their just-completed homestand and were hoping for a positive start on their road trip. Instead, they lost their fifth consecutive road game.

Kuhl pitched another superb game, allowing one run over six innings on just three hits. He struck out five and walked two. After five starts, he owns a 1.82 ERA. Kuhl’s ERA is the fourth-lowest through a pitcher’s first five starts — at the beginning of a season — in franchise history. It’s the lowest since Ubaldo Jiménez posted a 0.79 ERA through five starts in 2010.

Kuhl has given up just 16 hits (only four for extra bases), with 22 strikeouts and nine walks. Opponents are hitting .150 against the right-hander.

Not bad for a No. 5 pitcher whom the Rockies picked up for $3 million.

Kelly dominated the Rockies, just as he’s dominated almost everyone this season. He struck out eight, walked two and now owns a minuscule 1.22 ERA.

After issuing a two-out walk to Iglesias in the second inning, and until Ryan McMahon led off the seventh with a single, Kelly set down 13 consecutive batters.

In the first inning, the Rockies looked as if they might solve Kelly. Connor Joe led off with a single, advanced to second on Charlie Blackmon’s sacrifice bunt and scored on C.J. Cron’s double that just caught the left-field line.

But the Rockies’ hopes of knocking out Kelly early was just a desert mirage.

Arizona tied the game, 1-1, in the second, combining a leadoff single by Josh Rojas, a double by Ketel Marte and a sacrifice fly off the bat of Seth Beer, which right fielder Randal Grichuk caught in foul territory.

Kuhl was against the ropes but he struck out Nick Ahmed and Jose Herrera to end the inning.