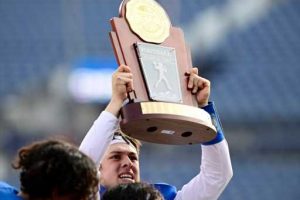 In the fourth quarter of Broomfield’s 24-14 win over Loveland Saturday, Cole LaCrue could barely walk.

At the end of the Class 4A championship game, he could barely talk.

With tears flowing and voice chocking, he spoke about his father, Joe, who died of complications from the coronavirus on Nov. 29, 2020.

“This one is for ‘Pops,’ ” the senior quarterback said. “I wish he was here with me. I wish I could give him a hug. It would make him so happy. He was my first coach and without him, there would be no Cole LaCrue and there would be no love of the game. He’s the reason I’m here.”

The senior quarterback, who recently announced his intention to play college football at Wisconsin, didn’t light it up in his high school finale, but he got the job done. LaCrue threw for 233 yards on 15-of-25 passing but was picked off twice. He rushed for just 9 yards on 13 carries but did plow through the line for two short touchdowns.

He played much of the second half of the season on an injured right ankle that was heavily taped. The Red Wolves roughed him up and he was hobbling when he took the final snap.

LaCrue clearly was the heart and soul of an Eagles team that finished the season 14-0. He completed 64% of his passes (167 of 261) for 2,648 yards and 26 touchdowns while throwing just six interceptions.

“Credit to that kid,” Loveland coach Alan Jeffries said. “I mean that kid can throw a ball. We played some great quarterbacks this year but he’s definitely in that top-tier company.”