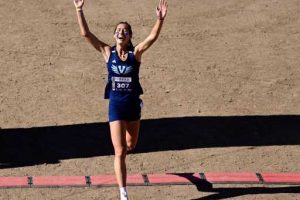 The senior captured the Class 5A individual state championship in October, setting a state record of 16 minutes, 59.17 seconds. It smashed the previous record of 17:07.83 set by Grandview’s Brie Oakley in 2016.

“Wilson achieved one of the most remarkable performances of her career by becoming the first girl in Colorado prep history to break the 17-minute barrier on the state championship course at Norris-Penrose Events Center,” Erik Boal, an editor for DyeStat.com, said in a news release. “She also emerged as one of the nation’s elite performers in 2022 with her victory at the Desert Twilight Festival in Arizona, then capped her memorable season with a runner-up showing at Nike Cross Nationals, the best finish by a Colorado female athlete at the event since 2016.”

Wilson, who has a 3.52 grade-point average, signed a National Letter of Intent to run for Wake Forest University in the fall.