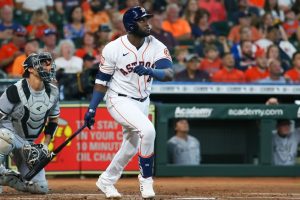 Houston Astros slugger Yordan Alvarez was not in his team’s lineup for Sunday night’s series finale against the Chicago White Sox because of a hand injury and is considered day-to-day, manager Dusty Baker said.

“Hopefully it will just be a few days,” Baker said.

Baker told reporters that the “prognosis was better than we had hoped for” and that there was no structural damage. Baker initially would not reveal the location of Alvarez’s injury before relenting and revealing it was his hand.

Baker said he didn’t want to reveal the location of the injury “because the opposition will pitch him differently, which will hurt him and hurt us.”

Alvarez, who has appeared in 32 games at designated hitter and 27 in left field for the AL West-leading Astros this season, suffered the injury on his final swing in the seventh inning of Houston’s 7-0 loss to the White Sox on Saturday.