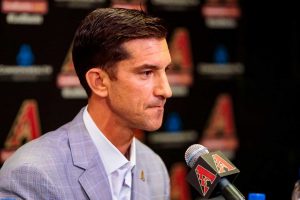 PHOENIX — The losses keep mounting, the misery and frustration has been unbearable, but as everyone in the Arizona Diamondbacks organization was reminded Friday, it’s just baseball.

Mike Hazen, general manager of the Diamondbacks, is taking an indefinite leave of absence.

His family, you see, needs him much more than his baseball team.

His wife, Nicole, is batting an aggressive form of brain cancer called glioblastoma, which has a typical life expectancy of 12 to 18 months.

Nicole, 44, was officially diagnosed with the disease 11 months ago.

“Nicole is doing OK,’’ Hazen said. “She is grinding. But we’re being realistic about the journey that we’re on right now.’’

Hazen, 45, was asked by Diamondbacks owner Ken Kendrick and president Derrick Hall during the winter if he wanted to step aside, but Hazen told them he could manage. They checked with him during spring training. Really, just about every time they talked, they asked him whether he needed time away.

Hazen kept fighting, insisting he could do his job and take care of his family, which includes his four sons ranging in age from 10 to 15.

It was three days ago when he finally relented, knowing the time had come.

He needs to be with his family, now more than ever, and with the amateur draft and trade deadline around the corner, he had to be at home.

“I’ve got to say I’m glad that he’s come to this decision,’’ Hall said. “We thought it was just a matter of time for him to come to this conclusion. And it’s at a time where he really needs to be there rather than here. It’s very tough for Mike, and I know what a perfectionist he is. If he doesn’t feel like he’s giving 100% on this side or 100% on the home side, he’s drowning in the middle. And that’s not fair to him. …

Hazen, a tireless worker and well-admired in the baseball community, didn’t publicly address Nicole’s illness until spring training. He talked about Nicole having a seizure walking from the kitchen last May. The surgery she underwent in August to remove as much of the tumor as possible. The chemotherapy. The radiation treatments.

And, of course, the prayers.

There are so many highs and lows, any loved one will tell you, with brain cancer patients.

One day, they feel great. The next, they can’t get out of bed.

One day, you’re crying full of joy, believing that a miracle is coming.

The next, your eyes are full of tears, wondering how long everyone has together.

“Nothing over the last 14 months,’’ Hazen says, “has been the same from one month to the next. And that’s presented its challenges.’’

Hazen, looking back, believes now he was perhaps fooling himself that he could take care of his family as well as run a ballclub. It was easier, of course, with his home just 20 minutes away from the D-backs spring training complex. But now, with all of the demands of his time, the travel, the phone calls, it just became impossible.

He was supposed to be on the Diamondbacks’ two-game swing in Oakland this week, but canceled. It hit Hazen then that he needed time, and reached out to Hall and Kendrick, saying he needed to step away. He couldn’t wait until after the July 30 trade deadline.

“I felt like there was sort of running up against a clock,’’ he said, “making that decision.

MLB trade deadline: The biggest names who could be moved by July 30

He’ll still be around, staying at home with a phone and computer, instead of coming to the office or games, but the day-to-day operations will be handled by Amiel Sawdaye, his assistant GM. He still was on a 2½-hour Zoom call on Friday talking about the draft, and will be involved as much as possible.

Yet, there will be days he won’t always be available.

There will be times he won’t want to talk about the team, which has lost 30 of its last 35 games.

And there will be times he won’t want to talk at all.

He broke the news to his four sons that he’ll be around full-time, and like any baseball family, they are baseball-obsessed like their father. Two of the boys wanted him to keep working. The other two are thrilled he’s home.

“They understand,’’ Hazen said. “We’ve been dealing with this for a while now. You know, they’ve taken such great care of their mom. …

The D-backs, Hall said, don’t know when Hazen will return. It could be two months. Six months. A year. It doesn’t really matter.

He needs to be spending every minute at home, being with his family, taking care of Nicole, and Charlie, John, Teddy and Sam, too.

The family knows Nicole is a fighter. The outpouring of love and support has been uplifting for her and the entire Hazen family.

The message is simple: