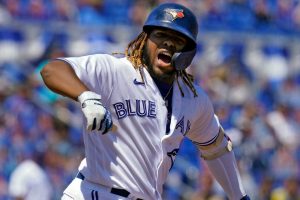 We just passed one of the major mileposts of the MLB season, with Memorial Day roughly corresponding to the conclusion of one-third of the 2021 schedule. Two months down, four more to go.

The playoff races starting to take shape, and so are the individual awards races. With enough of a statistical sample to start evaluating player performances, let’s take a look at how things could potentially shake out for Most Valuable Player, Cy Young and Rookie of the Year in the American and National Leagues.

We’ll offer up the top three candidates for each award at the one-third mark, along with a few others who should also be under consideration. And just for fun, we’ll throw in a dark-horse candidate who might not be getting all the recognition he deserves.

Vladimir Guerrero Jr. has adjusted his swing to produce more fly balls, and as a result he's tied for the major league lead in home runs. (Photo: Chris O'Meara, AP)

In his third MLB season, Guerrero has seemingly become the dominant hitter he was destined to be as the son of a Hall of Famer. But Vlad Jr.'s success is not all due to genetics; he's had to put in a ton of work on his own — from dropping nearly 40 pounds this offseason to increasing his average launch angle.

Ohtani has been magnificent on the mound (2.72 ERA) and at the plate (15 HR, 40 RBI). The uniqueness of one player excelling at both will keep him in the MVP race, even if the Angels aren't playoff contenders.

The Central-leading White Sox have reigning MVP Jose Abreu, but Moncada has been just as much a part of their hot start as anyone. He's second in the AL to Guerrero in on-base percentage (.417) on the team that leads the majors in that category. His defense at third base has also been excellent.

Tatis has given the first-place Padres spark and swagger, hitting .299 with 15 homers and 12 stolen bases. And that's despite missing 17 of their 54 games.

If the Giants are able to keep pace with the Padres and Dodgers in the West, Crawford will be one of the major reasons. With 11 home runs, he's more than halfway to his career high. Plus, the three-time Gold Glove shortstop is playing his usual stellar defense.

Cole has been utterly dominant, pitching to a 1.78 ERA with 97 strikeouts and only nine walks in 70 2/3 innings. He leads all pitchers with 3.0 WAR.

Rodon (1.98 ERA) and Means (2.05) have already thrown no-hitters this season, while being among the game's best in limiting hard contact.

The surging Rays may have unleashed a true ace in Glasnow (2.57 ERA). He's second in the majors to Bieber in both strikeouts (with 98) and swinging-strike rate (16.9%). If he can just figure out how to handle the Blue Jays (10 of his 20 earned runs have come in two starts vs. Toronto), he could join the elite tier.

Mets pitcher Jacob deGrom has given up a total of four earned runs in his first seven starts of the 2021 season. (Photo: Brad Penner, USA TODAY Sports)

A sore muscle in his side is the only thing that's managed to slow down deGrom this season. He leads the majors with a 0.80 ERA and 0.60 WHIP over seven starts. If he keeps pitching this well, he'll enter the MVP conversation.

Woodruff (1.27 ERA, 0.69 WHIP) has been almost as good, with an MLB-leading 10 quality starts in his 11 trips to the mound. Bauer and Darvish finished 1-2 in last year's NL Cy Young voting and both have been strong again. Watch out for Darvish's teammate Musgrove, who threw the season's first no-hitter and currently sports a 2.08 ERA.

AL Rookie of the Year

Garcia has surged ahead of early front-runner Mercedes by excelling in all phases of the game. He's tied with Guerrero for the home run lead, while chipping in 41 RBI, six steals and a homer-robbing catch in the outfield.

Adolis García hits plenty of homers … turns out he takes them away too. pic.twitter.com/8hPxU3YVZm

Manoah had an emotional and successful MLB debut last week; he looks like he could hold down a rotation spot for the rest of the season. And there's still plenty of time for Franco — the top prospect in the minor leagues — to make a major impact this season.

NL Rookie of the Year

Rogers hasn't just been one of the best rookie pitchers this season, he's been one of the best pitchers, period. In 11 starts, he's posted a 1.87 ERA with 76 strikeouts in 62 2/3 innings. He's slightly ahead of his teammate, Chisholm, who's been dealing with a nagging ankle injury for the past month.

Carlson has been solid in an everyday role for the Cardinals. Anderson has been the Braves' most reliable starter And Hayes, who hit .376 last September — is poised to return this week from a wrist injury he suffered on April 3.