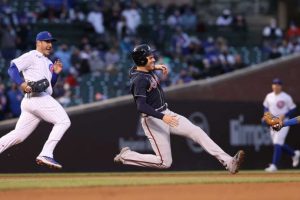 At first glance, the rundown play in the fourth inning of Sunday night’s Braves-Cubs matchup seemed just an ordinary baseball moment: Reigning NL MVP Freddie Freeman was caught in a pickle between second and third, chased by the Cubs’ Anthony Rizzo, before being tagged out to end the inning.

But it was much more than that, as we soon saw — and heard. Rizzo was wearing a mic for ESPN’s “Sunday Night Baseball,” allowing viewers to hear his playful taunting of Freeman as he chased him down on the base paths.

“FREDERICK!” Rizzo bellowed during the rundown, as if to say, “I’m coming for you!”

Both players, we learned, had a good chuckle in the moment. It was, as MLB’s Cut 4 Twitter account later put it, “just a couple of kids playing tag.”

But more than that, the banter put an enjoyable human spin on the game that fans seldom get to see — which is exactly why MLB should do a lot more of it.

Want to grow the game? Want to attract new fans? Want to reach a younger and more diverse demographic? Here’s one way: Mic players up every game. Multiple players, every game, with the broadcasts sharing the good stuff as soon as possible after it happens.

This shouldn’t be limited to ESPN’s signature weekly baseball game or jewel events such as the All-Star Game. It should be the norm — because it would offer fantastic insight into the interplay between the game’s biggest names and personalities.

Of course, this isn’t the first time such a suggestion has come up. Or the fifth. Or the 50th. Every time an MLB broadcast mics up a player, fans inevitably plead for more. To MLB’s credit, it’s happened more in recent years. But there’s so much more room to grow, and the benefits to the MLB brand would seem to be significant.

As recently as 2017, the average age of MLB fans was 57 years old. That’s significantly older than the other major American sports, and it’s a stumbling block in the way of making new fans. The NBA and the NFL are in large part driven by player personalities. It’s beyond beating a dead horse at this point, but MLB continues to lag those leagues in promoting the names, faces and voices of its biggest stars. But something as simple as a microphone can be a valuable tool.

Remember in 2018 when audio leaked of then-Mets manager Terry Collins’ tirade to umpire Tom Hallion? The one that launched “ass in the jackpot?” The response was fans was near-universal delight. It was a brilliant and entertaining showcase of baseball’s much-touted “human element.” It was real, it was raw and it was great. And though the Collins audio was certainly not the thing MLB wants aired on a national broadcast, the takeaway from that and the Rizzo-Freeman encounter remains clear: It’s good to offer a peek behind the curtain and take fans where they can’t normally go.

Baseball must find more ways to present its players as humans and give fans a reason to care beyond the stats and on-field play. The NFL continues to have success with “Hard Knocks” and “All or Nothing,” both of which are driven by the appeal of getting behind the scenes. MLB has dabbled in that space before, as have individual teams, but there’s never been any consistency in producing something to generate continual interest and hype. It remains a missed opportunity.

For all the rule changes, both implemented and proposed, that are theoretically designed to give the game more action and more entertainment, it’s more likely that MLB’s best bet to generate enthusiasm is for it and its rights holders to put viewers on the field like they did Sunday night.

Baseball is fun, and its players are the best ambassadors for spreading the word — so MLB should help them as much as possible.

Baseball’s sights are great. Its sounds are pretty good too.