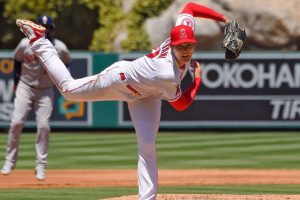 The Los Angeles Angels have scratched Shohei Ohtani from his scheduled start Monday night against the visiting Tampa Bay Rays, a decision that came a day after the right-hander was hit on the right elbow by a pitch.

The Angels said lefty Jose Quintana will instead start against Tampa Bay, which will counter with Tyler Glasnow.

Ohtani was hit on the right elbow in the first inning of Sunday’s 2-0 loss at Seattle. Los Angeles manager Joe Maddon said after that game that the elbow was sore and the Angels would need to check Monday morning on Ohtani as to whether he’d still be able to pitch against the Rays.

Ohtani was wearing a pad on the elbow after Sunday’s contest.

Ohtani earned his first win in three starts this season in his last outing, overcoming a rough first inning at Texas. He has a 3.29 ERA and 23 strikeouts in 13 2/3 innings.

Information from The Associated Press was used in this report.