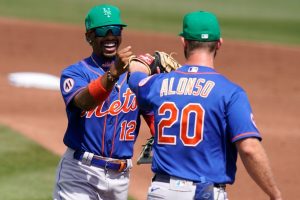 As the New York Mets’ contract negotiations with Francisco Lindor approach their Opening Day deadline, one of Lindor’s teammates is going to bat for the star shortstop.

The Mets were widely expected to sign Lindor to a long-term extension after acquiring the four-time All-Star in a blockbuster trade with the Cleveland Indians this offseason. But Lindor has stated that he will “go to free agency” if he doesn’t have a deal in place by Opening Day, saying he does not want to negotiate during the season.

Multiple media outlets reported Tuesday that the Mets have offered Lindor a 10-year deal worth $325 million — which would match the fifth-most lucrative deal in baseball history.

Lindor and his representatives responded with a 12-year, $385 million counterproposal that the Mets balked at, as of Wednesday morning, according to ESPN’s Jeff Passan.

Manager Luis Rojas declined to discuss the negotiations Tuesday, saying only that Lindor has “been solid” in his first spring training with the team and that the Mets “appreciate it every day.”

Owner Steve Cohen, however, has taken to social media to comment on the Lindor situation, tweeting Tuesday that he “hope(s) he decides to sign.”

Alonso, entering his third season with the Mets, echoed those sentiments.

“Not only does he have the quantifiable numbers of a superstar, he has the X factor,” Alonso said. “What he brings to a clubhouse is tremendous and can’t be measured.”

The Mets open their season Thursday against the Washington Nationals.

Lindor, 27, struggled offensively during the pandemic-shortened 2020 season with Cleveland, batting .258 with a .750 OPS — both career lows — while finishing with 8 home runs, 27 RBIs and 6 stolen bases in 60 games.

But Lindor eclipsed 30 homers and recorded an OPS of at least .842 in each of the previous three seasons, and he is a two-time Gold Glove winner at shortstop.

Mike Trout is the only player in Major League Baseball with a contract worth more than Alonso’s aforementioned $400 million. The three-time MVP signed a 12-year, $426.5 million deal with the Los Angeles Angels before the 2019 season.