Home » MLB » After ugly home showing in 2020, Rockies playing like a playoff team at Coors Field in 2021

After ugly home showing in 2020, Rockies playing like a playoff team at Coors Field in 2021 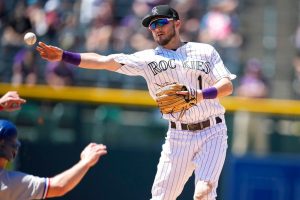 On the road, the Rockies are a disaster waiting to happen. But at home, Colorado is playing like a playoff team.

After going 12-18 at Coors Field in the condensed 2020 season to post the lowest home winning percentage in franchise history (.400), the Rockies have been dangerous in LoDo this year.

Entering Thursday, only two National League teams, the Cubs and Dodgers, had more home wins than Colorado. And a 11-6 defeat of the hapless Rangers on Thursday to complete the sweep pushed the Rockies’ home record to a robust 19-12 (.613).

“I wish I had the answer (on how to bottle up home success),” manager Bud Black said. “Our guys feel comfortable here… they’re super confident swinging the bats here, and our pitchers are feeling at home, in their own environment.”

Colorado is averaging over six runs per game at home, while the rotation continues to set the tone for victory. Including Austin Gomber’s six innings of shutout baseball on Thursday, Rockies starters have a 1.84 ERA over the past 12 games at Coors Field.

A favorable early home schedule has also benefited the Rockies, who have capitalized on weaker competition in LoDo. Five of Colorado’s 19 wins at home have come against last-place Arizona, while the Rockies also won home series against losing teams in Texas and Philadelphia.

Of course, the Rockies’ home successes stand in stark contrast to their performance on the road, where Colorado is an MLB-worst 4-22.

Fans can cast their votes online at MLB.com or on any of the 30 club sites, the MLB App or by searching Google until the initial voting period ends June 24.

The second round of voting will feature the top three vote-getters at each position. That period runs from June 28 to July 1 and determines who makes each team, as well as the starters.

Among the Rockies, infielder Ryan McMahon is most likely to earn a nod to this year’s game.

McMahon sits. Speaking of McMahon, he didn’t play Thursday as he rested with what the club described as tightness in his left groin. It is not considered serious, and he was due for a day off, having played in all 56 of Colorado’s games entering the Rangers series finale.

“He suffered (the strain) early in the game on Wednesday, but he played through it,” Black said. “It was pretty sore after the game, so we decided Wednesday night he wasn’t going to play. But he’s feeling much better (Thursday), and he got some treatment… It’s not an injury-list scenario, we believe.”

Gray has been solid at Coors Field this year, going 4-1 with a 2.36 ERA (42.0 IP, 11 ER) in seven starts. He allowed three runs across three innings in his last outing, a loss in Pittsburgh. He has pitched at least six innings in six of his 11 starts. He’ll be making his first career start against Oakland, but Gray is undefeated in his career in interleague home starts, posting a 6-0 mark with a 2.05 ERA. Meanwhile, Montas began his year with an ugly seven-run, two-plus inning outing and his performance has been consistently shaky from there. But he’s been piling up strikeouts lately, with 18 across his past two starts.

Trending: Colorado’s offensive breakout on Thursday in the 11-6 win over the Rangers was the most runs the Rockies have scored since May 13, a 13-8 win over the Reds at home.

At issue: The Rockies’ home cooking will be put to the test with a three-game series against Oakland this weekend. The Athletics are in first place in the AL West and are coming off an off-day following a series win in Seattle.