Home » After false alert on trade, Cubs’ Kris Bryant heads into contract year: ‘I just show up and play’ 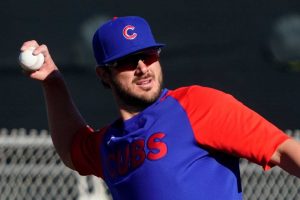 MESA, Ariz. — The text message popped up several weeks ago on Chicago Cubs third baseman Kris Bryant’s cell phone. He looked, and looked again. It was from an unknown Connecticut number several.

The message staggered him.

Hoyer reassured Bryant in a private conversation that he’s not going anywhere.

Well, at least for now.

This likely will be the final year of Bryant’s career in Chicago, and the only real question will be whether he’ll be completing the season in a Cubs uniform. Bryant declined a long-term contract offer years ago, worth about $200 million, but they since haven’t engaged in any serious discussions.

Now, eight months away from free agency, Bryant heads into the Cubs’ spring training camp, prepared for a final ride.

He came into Chicago as a 23-year-old kid and now finds himself a husband, father, World Series champion, Most Valuable Player and three-time All-Star.

“I’m proud to say I haven’t changed at all. Honestly, my whole life, this is who I am. I don’t want to put too much on myself, any more pressure.

“I want to go out there and dominant. It’s who I am. This is what drives me.’’

Bryant, of course, knows life is different since he first joined the Cubs in 2015. That was a team on the rise. It was a team hungry to end their World Series drought. Money was no object as long as it brought a championship.

Now, he looks around, and president Theo Epstein is gone. So is manager Joe Maddon. Just five players remain from that 2015 team, and two left and returned. Who would have thought that his catcher on that 2016 World Series, David Ross, would now be their manager?

The Cubs' window is probably shut. The payroll has shriveled. Yu Darvish, the Cy Young runner-up, was dumped Outfielder Kyle Schwarber, one of their World Series heroes, was shown the door without even being extended a contract. Former ace Jon Lester walked away without an offer.

“You look at the Dodgers, and they’ve got lots of money over there, and they just won a World Series, too,’’ Bryant said, “so they’re doing fine. It’s pretty cool to see the Padres step up and make big signings and trades.

“There was a point where this team was doing that too.

“I'm sure it will happen in the future. I don't know what direction or what they want to do. I just show up and play and do what I do here.’’

Bryant says he’d be open to an extension but being this close to free agency and with the Cubs slashing payroll, it doesn't look likely.

The cold reality is that unless the Cubs are in the thick of the division race in July, Bryant could be one of the hot commodities on the trade market, with Hoyer promising Bryant that he’d keep him informed if anything ever got close.

Bryant, with a wife and 10-month-old son at home, says it will be easy for him to tune out the distractions. He’s ready to move past last year’s struggles, hitting just .206 with four homers and 11 RBI and a .644 OPS and drawing the wrath of fan criticism, after hitting 31 homers with a .903 OPS in 2019.

“Everybody's always going to judge you one way or another,’’ he says, “playing good, playing bad, not playing, playing, playing hurt. You can't make everybody happy. I wish I could, but all that really matters is if I'm making the people around me happy.’’

He is still convinced that the Cubs manipulated his service time his rookie year to retain him another year. And he’s well-aware the sentiments to stifle players’ earnings are alive and well after former Seattle Mariners CEO Kevin Mather’s plans were exposed.

“At first I was like, 'Wow!' ’’ Bryant said when hearing of Mather’s comments Sunday. “I mean, we kind of know that's the standard operating procedure, but I’m just surprised that he said it, that’s all. Obviously, I've been through that before. That's what [clubs] think most of the time.’’

Bryant can only hope that free agency can thrive once again, with the average salary decreasing each of the last three years and the owners and players set for an ugly fight over a new collective bargaining agreement.

“There’s going to be a battle,’’ Bryant said, “but hopefully certain things will change. Who knows, but we’re here to play baseball and I’ve got to focus on this year. I'm here to help the Cubs win, and do what I've been doing here for the last six years.’’

And, if this indeed is it, well, there’s nothing like going out the way he came in, reminding folks of his skills and talent and the joy that swept through Chicago.

“We’re going to do great things,’’ Bryant said. “I truly believe that. We’re here to win.’’